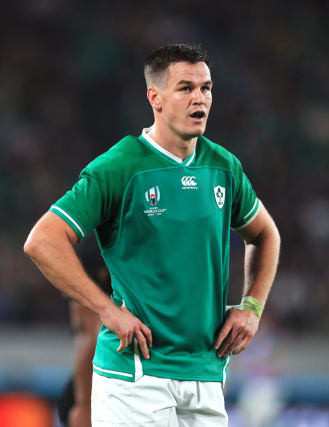 Johnny Sexton has insisted his angry demeanour at being substituted late into Ireland’s 35-27 Guinness Six Nations defeat in France was purely down to frustrations at his side’s performance.

Ireland captain Sexton cut an annoyed figure at being replaced by Ross Byrne in the final quarter of his side’s galling defeat at the Stade de France, shaking his head repeatedly in a prolonged trudge from the turf.

Ireland pitched up in France hunting a fourth Six Nations title in seven years, but were bested by a half-back masterclass from Antoine Dupont and Romain Ntamack.

Dupont and Ntamack both bagged scores with Virimi Vakatawa also crossing and the French claiming a penalty try to boot, as England sealed the title on points difference.

Cian Healy, Robbie Henshaw and Jacob Stockdale all crossed for Ireland but Andy Farrell’s side were outgunned in St Denis.

Asked what was going through his mind when he was substituted, Sexton replied: “I was very disappointed coming off, like everyone would be.

“You’re losing the game and you’re coming off, so what would you like me to be doing? It was disappointment that we didn’t win the game.

Ireland failed to convert a number of penalty line-outs into tries, rejecting shots at goal and coming up short in the event.

Skipper Sexton insisted he would have made the same calls in the hindsight of a frustrating defeat but did, however, concede that Ireland’s execution let them down on the night.

Asked if he had any regrets at rejecting a number of shots at goal, Sexton said: “No, because they had the yellow card so for 10 minutes we had the extra man.

“We should have scored from a couple of those we kicked to the corner, then just before half-time we could have taken three points and gone in with the lead.

“But look, we knew we had to win the game by six or get four tries, so we were trying our best to put the pressure on.

“We knew they could score tries out of nothing, it’s a bit like when you play the All Blacks.

“The decision was brave but the execution didn’t back up the decision.”