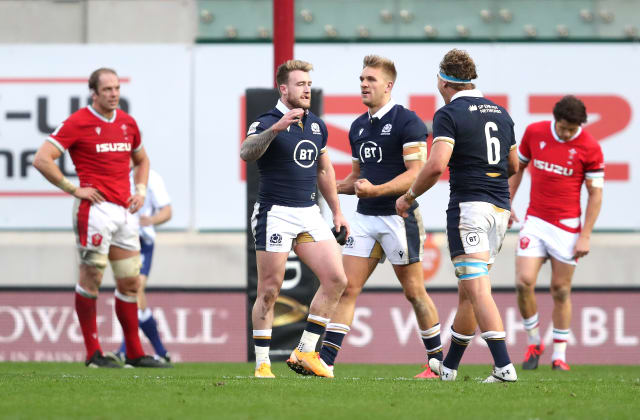 Gregor Townsend promised there was “a lot more to come” from his Scotland side as a 14-10 Guinness Six Nations victory over Wales ruined Alan Wyn Jones’ landmark day in Test rugby.

Wales captain Jones made a record 149th Test appearance in Llanelli, but the veteran lock forward was on the losing side as Scotland claimed a first win on Welsh soil since 2002.

It was a third straight win for Scotland in the delayed 2020 Six Nations after victories over France and Italy in the spring.

“To get an away win is something we’ve been waiting for a while in Wales,” said head coach Townsend.

“For this group it’s great to have some confirmation of the hard work and progress they are making.

“We know there’s a lot more to come. If it wasn’t such a special victory and the character was on show, I’d be thinking there’s so much more we’ve got to improve.

“But you need those wins to build the confidence in the group, for the players to see there’s progress. Come the next Six Nations we’ll have to be better because the teams we’re playing against are very good.

“It’s a step in the right direction but there’s a lot more work to do.”

Scotland dominated possession and territory at a wind-lashed Parc y Scarlets and won the battle of the breakdown, with flanker Jamie Ritchie named man of the match.

“To come back in the second half when we went behind and earn that win was good to see,” said Townsend, whose side finish the Championship with the best defensive record having conceded 59 points in their five games.

“It was a difficult situation with no crowd, the wind and injuries, so it was good see that togetherness and character and power in the second half. It was encouraging.”

It is the first time since 2007 that Wales have managed only one win in the Six Nations Championship.

Pivac said: “It’s not going to be lost on us, it was the worst defeat in terms of performance.

“We didn’t fire too many shots. We have to go away and put a line in the sand, because we have got two weeks to build into the Autumn Cup.

“We have to lick our wounds and make sure we make the right impression in that tournament.

“But we must improve because we lost our way in the last half-hour in the breakdown. We’ll certainly look at that because the breakdown killed us.”

Skipper Jones said: “We’ve got to improve, it’s as simple as that.

“They (Welsh public) have got high expectations from the previous 12 years. Of those 12 years we won three grand slams and a championship. We can’t really forget the eight years that were pretty dormant.

“We’ve got to work to change that.”

On his personal record, Jones added: “It’s done, now we can move on. It’s not the time to celebrate that now.”