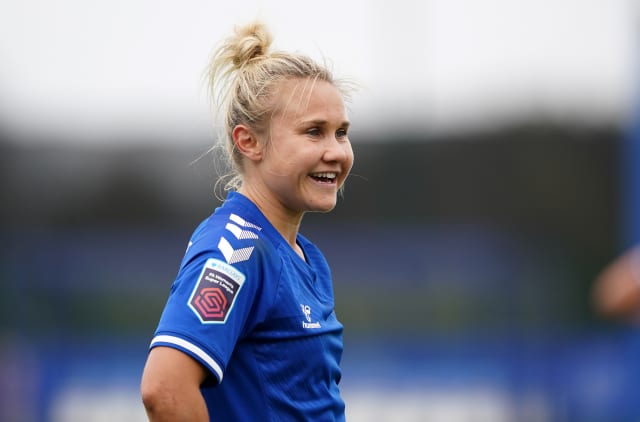 England midfielder Christiansen returned to Everton at the end of last year after spells at Birmingham, City and Lyon.

Kirk believes she is pivotal to his side’s chances of toppling the cup holders at Wembley.

“People like Izzy are absolutely essential to what we’re trying to grow at the club,” Kirk said.

“We’re trying to grow a group of winners, be successful. Izzy’s been there and done it and her experience on a day-to-day basis is huge, never mind on a one-off occasion like this,” Kirk said.

Christiansen struck the only goal for City in the 2014 Continental Cup final against Arsenal to secure them their first major trophy and Kirk said it would be “huge” if she proved to be the match-winner again.

“It would be pretty much full circle for her,” he said. “She was a young girl here and left to go and further her career.

“She did that very successfully, notably at Man City and Lyon. She’s now come back and she’s just as excited as players who haven’t won a tournament before.

“She’s desperate to play a major part in this club being successful again.”

Scotland forward Claire Emslie, another former City player, will not feature for Everton at Wembley after joining on loan from Orlando Pride in August, but still has a big part to play on Sunday, according to Kirk.

“Claire also did it with Man City,” he said. “She’s the one player who misses out for us in terms of us registering six new signings.

“She was the seventh, but again, her experience – she’s won things. She’s won titles in Australia, won things with Man City, she’ll be huge in the changing room for us on Sunday.”

City’s England trio Jill Scott, Alex Greenwood and Lucy Bronze are all former Everton players, while Chloe Kelly and Esme Morgan both appeared for Everton earlier in the competition.

England forward Kelly joined City from Everton in July, while defender Morgan made 11 appearances for the Toffees while on loan during the 2019/20 season.

“I suppose from Chloe and Esme’s point of view they’re guaranteed a winners’ medal,” Kirk added.

“I think this year is going to throw up quite a few very interesting trivia questions in the future, that’s for sure.”