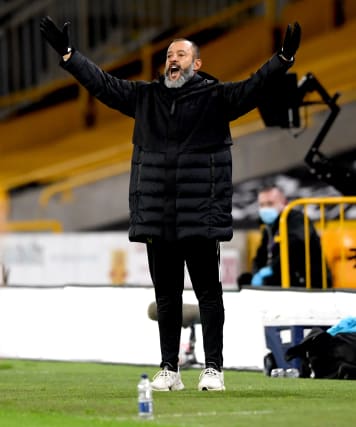 Nuno Espirito Santo admits Wolves’ toothless first-half displays are a cause for concern.

The team have failed to score before the break in 58 games since returning to the top flight in 2018 ahead of Friday’s visit of Crystal Palace.

It left them ninth in the Premier League and Nuno is worried about his side’s lack of first-half bite.

The Wolves boss said: “I’m very much concerned, I wish we could score in the first minute but we play against very good teams. The most difficult part of the game is to score and we have to work hard on it.

“It starts with being organised, compact and not conceding and then you can think about scoring.

“The chances are there, not so many clear ones, but we need to finish the action better and be more clinical. As long as we are organised the talent will come.

“We have to be patient enough to recognise the dynamics inside the team have changed. Players who came in need time and players who were here, due to many factors, have to improve their individual performances.

“Trying to do things fast is not the way we work, we have to sustain ourselves so we don’t have up and downs.

“The previous game we had a lot of the ball, good spells of possession, we were very organised and didn’t concede any chances but we made a terrible mistake on a set-piece. This is what we look at.”

Jonny remains out as he continues to recover from a serious knee injury he suffered last season.

The club will assess a number of knocks following the Newcastle draw ahead of the Eagles’ visit.

“Crystal Palace are a very good team, full of talented players. They are organised, with a very good manager and we know we have a tough game ahead,” added Nuno.

“We’ve had a good week and the approach is always about searching for improvement. We still have to improve a lot of things in the game. No matter what we did before there’s always a new game in front of us.”