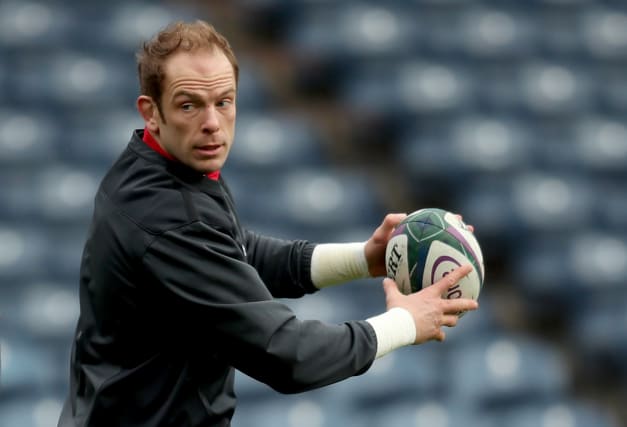 Wayne Pivac believes Alun Wyn Jones can play at a fifth World Cup as the Wales captain prepares to become the most capped Test player in rugby history.

The second row will be 38 when the 2023 World Cup starts, but Wales head coach Pivac – who says Jones is “first on the teamsheet” – feels he could still be representing his country at the tournament in France three years from now.

“If you look at it on ability and form, right now, I would have to say that there is no reason why he (Jones) couldn’t go to a World Cup, should he stay injury free,” Pivac said after announcing six changes in the team to take on Scotland in Llanelli.

“Everybody, though, does have that time when the body starts to slow down. Some go off a cliff quicker than others.

“But there is no reason why Alun Wyn couldn’t be one of those where you throw away the birth certificate and you just look at what he’s doing on a daily basis.

“At the moment, he’s first on the teamsheet.”

The delayed Six Nations clash with Scotland will be his 140th Wales appearance, in addition to nine British and Irish Lions Tests across their last three tours to South Africa, Australia and New Zealand.

Current British and Irish Lions head coach Gatland this week called Jones an “unbelievable competitor who leads by example”, and the Ospreys lock could make a fourth tour to South Africa next summer.

“He not only leads by example in the games but in training, he’s magnificent in the way he carries himself.

“He’s the first to every drill, always doing his extras and very professional in the way he prepares for training.

“The way he goes about previewing and reviewing the opposition, he’s a great example for us.

“Post-training he does all the recovery. If there is an optional session, then it’s not optional for Alun Wyn. He does everything by the book and he’s religious in the way he goes about his business.”

Wales head into the behind-closed-doors Parc y Scarlets clash on the back of four straights defeats – their worst losing run since 2016 when they lost five – and pressure growing on Pivac.

The only Wales win in this delayed Championship came against Italy and the last time they finished a Six Nations campaign with just one victory was in 2007.

Pivac has responded to last weekend’s friendly defeat to France in Paris by making six changes.

Tomos Francis, Exeter’s double-winning prop, takes over from Samson Lee at tighthead prop and Wasps second-row Will Rowlands has a first start in the second row.

Lewis-Hughes was originally being called into the squad as training cover but Pivac said: “We’ve picked up some injuries with Ross Moriarty, Josh Macleod and Josh Navidi.

“We just think he’s trained very well since coming in, he’s impressed everybody and he’s a player that we’ve earmarked for the future.

“This is going to be a big test for him but we think he deserves the opportunity after how he’s gone in training and what he’s showing us.”