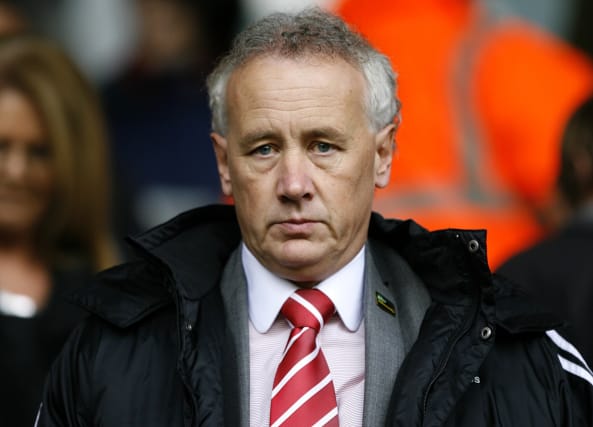 English Football League chairman Rick Parry says clubs have been “ignored” by the Government during the coronavirus pandemic and believes fans will never forgive them if teams go out of business.

In a letter sent to Culture Secretary Oliver Dowden, Parry criticises the double standards of the Government for overlooking football clubs while providing a £1.5billion rescue package for the arts sector.

Clubs across England are facing a major cash crisis due to the effects of Covid-19 and having to play matches behind closed doors.

With no supporters allowed inside stadiums since March, clubs are feeling the pinch due to the prolonged loss of gate receipts.

Despite calls for a reduced number of fans to be allowed back into grounds, the Government remains adamant that will not happen this year, with pilot events halted due to a second wave of coronavirus cases.

There have been negotiations with the Premier League over a bailout with the EFL rejecting a £50million rescue package for League One and League Two clubs earlier this month, designed to assist clubs affected by the coronavirus pandemic and made up of grants and interest-free loans.

But Parry insists the Government should be doing more and he says fans “will never forgive” them if their clubs go out of business.

In a letter to Dowden, also sent to EFL clubs and shared by Championship side Coventry, Parry said: “While football grounds in Rochdale, Grimsby, Mansfield and Carlisle might seem an awful long way from Glyndebourne or the Royal Ballet, they are nonetheless equally important parts of our nation’s heritage.

“It must have dawned on you that it is deeply unfair that cultural institutions like these are receiving Government hand-outs while also being able to generate revenues by admitting the paying public.

“For some reason, football is being regarded as a peculiarly undeserving case and, as a result, many of our clubs have now reached the conclusion that we are at best being ignored by a Government that doesn’t understand our national sport and at worst being victimised by it.

“Ultimately, the football public will judge the performance of this Conservative Government on how many football clubs remain in business once the pandemic finally subsides.

“Certainly, those communities that are inextricably linked to their local team will never forgive it if their beloved football clubs are driven into extinction.

“Discussions with the Premier League continue, however, it is clear that top-flight clubs are also feeling the effects of the pandemic, particularly the loss of gate revenue, and it may not be in a position to provide the level of support that is required.

“Therefore, the onus remains on you to remedy the situation rather than thinking of it as ‘job done’. After all, it is the Government that is currently preventing fans from going to games not the Premier League.

“EFL clubs, almost all of them the social cornerstone of the towns and cities they bear the names of, stand on the brink of a financial precipice.

“The Government’s response to the crisis that is engulfing football is particularly galling when compared with the comparative generosity being extended to other areas of your portfolio – for example, the £1.5billion funding package to the arts sector alone.

“Yet at the same time, football is told to support itself and its clubs have to play behind closed doors. I am sure you can understand how this disparity in approach must look to football fans in constituencies across the country.

“In any event, clubs will soon begin defaulting on these payments and the Government would be better off managing this situation rather than having it land on its toes.”

Former Culture Secretary and MP for Folkestone and Hythe, Damian Collins, has been expressing his concern about the perilous situation facing football clubs and he took to Twitter to lend his support to Parry’s letter.

“It’s extremely concerning to see this letter from the @EFL Chairman warning of the dire financial situation currently faced by clubs unless there is a proper plan of financial support,” his tweet read.

“I’ve been calling for this with others for months. It would seem that time is running out.

“I am contacting Rick Parry to ask if he will meet with me and other MPs who share our concerns about the future of football, before the end of this week, to urgently discuss his letter, and what needs to be done and by when to resolve this crisis.”