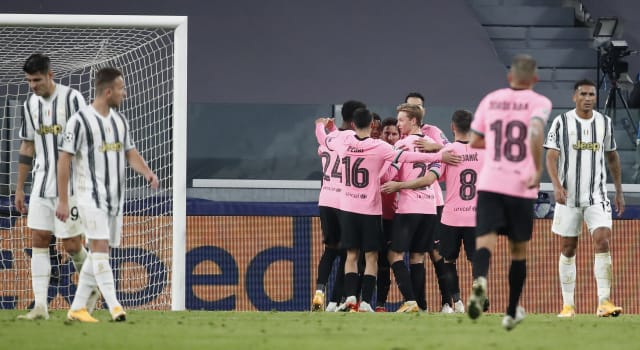 The Italian champions suffered their first defeat under new manager Andrea Pirlo but could still take encouragement from their performance in the absence of talisman Cristiano Ronaldo, with Alvaro Morata having three goals ruled out.

Ronaldo’s absence, confirmed by another positive Covid-19 test on Tuesday, drained a little of the fixture’s star quality to deny another head-to-head with Messi, but Barcelona did not care.

Dembele’s strike may have had a touch of fortune about it, but it came courtesy of a delightful Messi assist and was backed up by an assured and dominant display by the Spanish club.

The other game in Group G saw Ferencvaros come from two goals down to draw 2-2 with Dynamo Kiev as Franck Boli equalised in the final minute.

A week on from their deserved triumph at finalists Paris St Germain, United continued their 100 per cent start to Group H by securing a first home win of the season in some style.

Rashford was the hero in the French capital and was key again on Wednesday, netting a treble off the bench as Anthony Martial and Mason Greenwood also scored against Bundesliga leaders Leipzig.

PSG got off the mark in Turkey with a 2-0 win against Istanbul Basaksehir thanks to Moise Kean’s second-half double, although Neymar went off injured.

Chelsea delivered a commanding performance to seal an emphatic 4-0 win at Krasnodar.

Callum Hudson-Odoi, Timo Werner, Hakim Ziyech and Christian Pulisic all found the net after Jorginho had seen a penalty saved as the Blues eased to their first Group E victory in Russia.

The other game in Group E saw Europa League champions Sevilla win 1-0 at home against Rennes thanks to Luuk De Jong’s strike early in the second half.

Jadon Sancho scored from the penalty spot and Erling Haaland was on target in injury time as Borussia Dortmund gained their first points in Group F with a 2-0 victory over Zenit St Petersburg, who have now lost both of their matches.

Club Brugge and Lazio are both on four points, one ahead of Dortmund, after sharing a 1-1 draw. Hans Vanaken’s spot-kick cancelled out Joaquin Correa’s opener for the visitors.