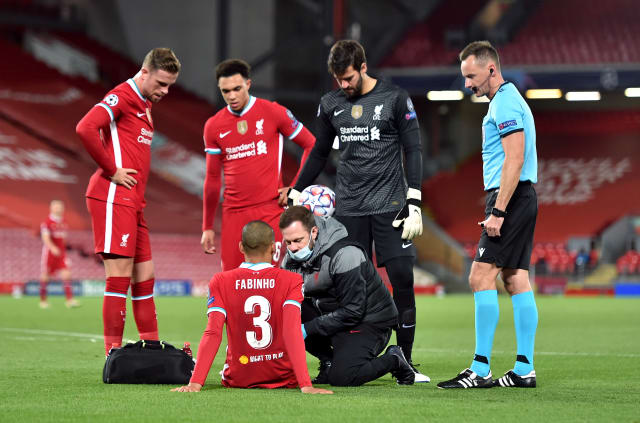 Liverpool boss Jurgen Klopp was unsure about the seriousness of Fabinho’s injury after the Brazilian came off in the first half of the 2-0 home win over Midtjylland in the Champions League.

The Reds’ latest defensive setback came around the half-hour mark when Fabinho – playing at centre-back again in the absence of Virgil Van Dijk and Joel Matip – had to be substituted having pulled up while running.

When asked afterwards what the early signs were in terms of the severity of Fabinho’s injury, Klopp said: “I don’t know. You know, muscle injuries are like this – you get the result, but tomorrow morning probably. So we have to wait for that.”

Both Van Dijk and Matip sustained injuries in the 2-2 draw at Everton on October 17 – the former a knee problem that is set to sideline him for a number of months.

Asked if Matip could be available for Saturday’s home clash with West Ham, Klopp said: “I don’t know, we have to see”.

Fabinho was replaced by 19-year-old Rhys Williams, who made his fourth senior appearance and is yet to play in the Premier League.

Klopp said of Williams: “He did really well. The only problem we have now is we have four days to the West Ham game and you will make every day a story of him and then he has to prove he can deal with that as well, because the vibe was calm around him.”

Weighing up other options from the fringes of his squad, Klopp also mentioned Nathaniel Phillips and Billy Koumetio and said: “We have very young and inexperienced alternatives, and at the moment it looks like we have to choose one of them.

“I don’t know yet – but to be really clear and positive, Rhys was not in one situation tonight our problem, he played a really good game.”

Klopp – who confirmed his withdrawal of Jordan Henderson at half-time was as he had planned before the match – opted not to start with Mohamed Salah, Sadio Mane or Roberto Firmino for the Champions League Group D contest.

What followed was an underwhelming first-half display from the hosts as they failed to register a shot on target.

Diogo Jota then put Liverpool ahead in the 55th minute with a close-range finish, and after Midtjylland had twice gone close to equalising, Salah – having come on along with Mane on the hour – added a penalty in stoppage time.

Asked by a Danish reporter if the changes he made were a sign of underestimating the visitors, Klopp said: “If you watched a little bit more Liverpool then you would know how our situation is and then you would not think this today is a sign for not respecting Midtjylland.

“The line-up we chose was to show the respect we had for Midtjylland, because we needed fresh legs desperately.

“I think if you watched the game then you saw we needed each fresh leg we could get, and with the five possible changes, we could then finish the game off.”