Boy, 7, scores 'luckiest goal' after ball hits him in the face 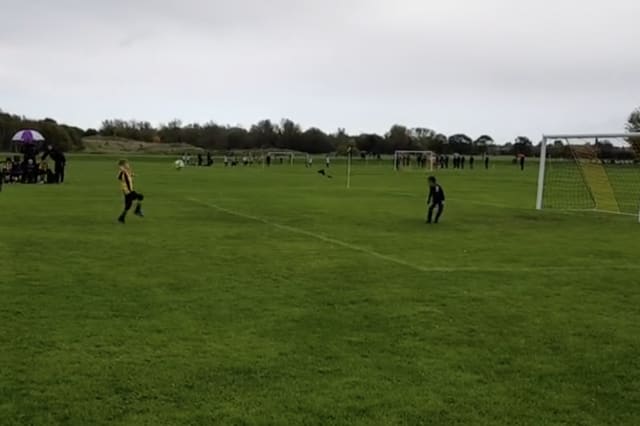 This video shows the moment a seven-year-old footballer scored the "luckiest goal ever" after the ball was smashed into his face - then looped over the goalie.

Dad Robert Sedgley was watching his son Lewis from the sidelines playing for Tigers under 8s when the youngster found the net with a bizarre finish.

He caught the goal on camera and said the crowd roared with laughter when the ball crossed the line. The unconventional header put the Tigers 5-4 up against Finesse before the game finished as a draw.

Robert, 43, of Hornchurch, east London, said: "It was a wonderfully flukey goal. Lewis chased down the ball and the goalkeeper has gone to clear it. He then caught it straight in the face and it turned into a great header. It just looped over the goalie and went in.

"If it hadn't gone in he probably would have cried as it did hurt - but he was over the moon.You can hear all the parents initially wince and go 'ooh' when it caught him in the face. Then there was a big cheer as it bounced over the keeper and went in.

"Everyone has just been laughing about it. The fact I caught it all on video was even more comical.

"Lewis actually scored two goals in the game, the other was a nice strike where he chipped the goalie. But this one was so comical it has got all the attention."