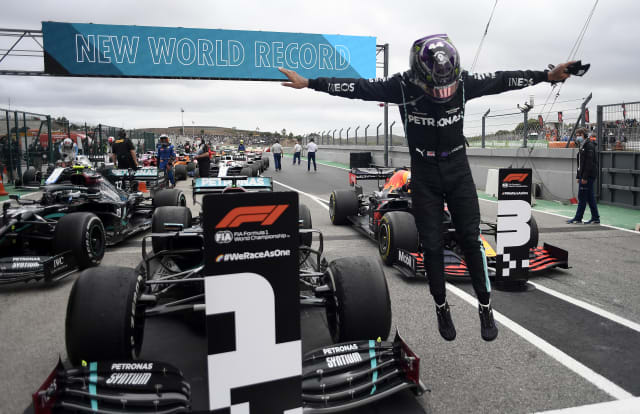 Lewis Hamilton broke Michael Schumacher’s Formula One record of 91 career wins with victory on Sunday at the Portuguese Grand Prix.

Hamilton, one of the greatest drivers in the history of the sport, has sealed his place among Britain’s all-time sporting greats.

Here, the PA news agency takes a look at some of the candidates who could make the hallowed, and highly subjective, list.

The 35-year-old has surpassed Schumacher’s mark of 91 Grand Prix wins and is on course to equal the German’s record of seven world championship titles. Hamilton also holds the records for most podium finishes, most career points and most championship points in a season.

Hoy is the most successful Olympic cyclist of all time. He won a total  of six gold and one silver medal and in 2008 became the first Briton in 100 years to win three golds at one Olympic Games. Hoy is also an 11-time World Championship winner.

Redgrave was Britain’s greatest Olympian until his remarkable feats were surpassed by Hoy, winning gold rowing medals at five successive Olympic Games from 1984 to 2000, his last one at the age of 38 and three years after being diagnosed with diabetes. Redgrave also won nine golds at the World Championships.

Ennis-Hill is Britain’s greatest female athlete of all-time. She lived up to her poster girl status by winning heptathlon gold at the 2012 London Olympics and was twice crowned world champion. She has held British records in four different disciplines and was also one of the world’s leading 100m hurdlers.

Best is regarded as one of the greatest footballers of all-time, voted sixth in FIFA’s player of the 20th century poll. Named European player of the year in 1968 after helping Manchester United win the European Cup, the Northern Irishman was also described by Pele as the best he ever saw.

Farah is the most decorated British track athlete in modern Olympic Games history. He won 5,000m and 10,000m gold at both the 2012 and 2016 Olympics and also completed the double at the World Championships in 2013 and 2015. He is the first man to successfully defend his titles at both major competitions.

Grey-Thompson was a pioneer for global disability sport. The Briton was crowned Paralympic champion 11 times – in Barcelona, Atlanta, Sydney and Athens – and won six world titles while competing mainly in events ranging from 100m to 800m. She also broke 30 world records.

In an era dominated by tennis greats Roger Federer, Rafael Nadal and Novak Djokovic, Murray reached world number one and won three grand slam titles at Wimbledon (2013 and 2016) and the US Open (2012). He was twice crowned Olympic champion (2012 and 2016) and led Great Britain to Davis Cup glory in 2015. He was also runner-up in eight other grand slam finals.

O’Sullivan is widely regard as the best snooker player of all-time. He is a six-time world champion, a record seven-time Masters champion and a record seven-time UK champion. He also holds the record for the most ranking titles, with 37, winning his first aged 17.

Taylor, recognised as darts’ greatest-ever player, won the World Championship on 16 occasions – eight times consecutively from 1995 to 2002 – and reached 14 successive finals. He dominated darts for over two decades, winning a record 85 major titles.