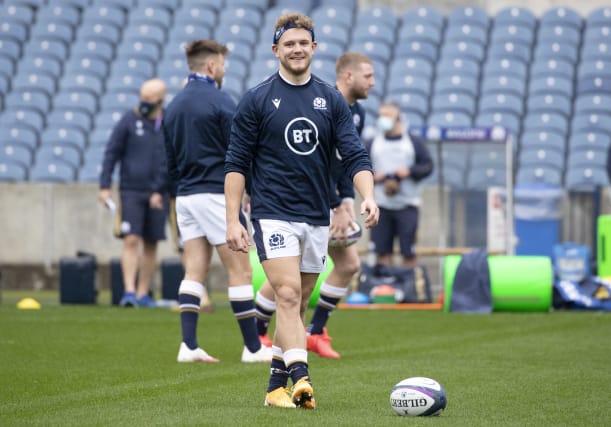 Darcy Graham was excited to finally link up with his Edinburgh back-three colleagues for Scotland – and cap it off by weighing in with at least a try each.

Graham scored two tries in the 48-7 friendly win over Georgia, while fellow winger Duhan Van Der Merwe scored on his debut before Blair Kinghorn got in on the act in the final moments.

“It was unreal,” Graham said. “I know what Duhan can do, he has done it for three years for Edinburgh, he has been outstanding.

“Me, Blair and Duhan complement each other really well so it was really exciting to have our whole Edinburgh back three.

“It was the first time we have all scored in the same game so it was quite nice for us all.

“I kind of know what Blair is going to do before he knows it. I always give him room to work off. It definitely helps knowing what they are going to do, it does make a huge difference.

“Duhan has fitted right in and has not looked out of place. The Scotland camp is a great environment and these boys can easily slip in and it showed on Friday, he didn’t look nervous at all and he took everything in his stride.”

Graham is now looking to take the positives into Saturday’s Guinness Six Nations clash with Wales at the Parc y Scarlets in Llanelli.

The 23-year-old made his debut on the same stage two years ago and scored his first international try against the same opponents at BT Murrayfield the following year. However, both games ended in defeats.

Now, with seven tries in 11 international appearances to his name, Graham is looking to go one better against Wales, who are three points behind Scotland in fifth place.

Graham said: “We are only going to get a few chances so we are going to have to take them when they’re on.

“Two years ago on my first cap we never did that, we had a few chances and didn’t execute them and ended up losing the game.

“So when we get our chances on Saturday we are going to have to be clinical and finish them off.”