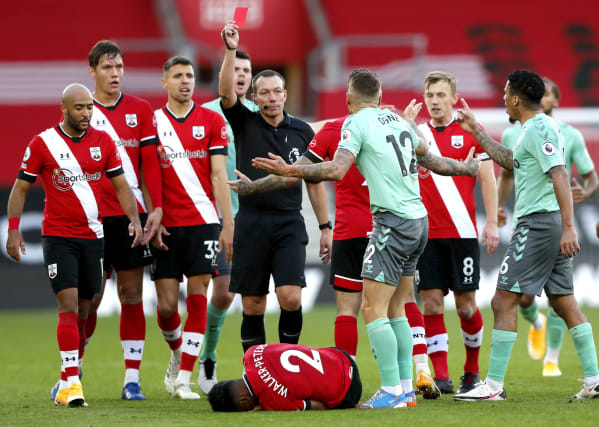 Everton’s unbeaten start to the Premier League season came to an end as they finished with 10 men in a 2-0 defeat at Southampton.

The visitors struggled to get going as Saints were clinical, taking a two-goal lead inside the first half.

James Ward-Prowse fired past England number one Jordan Pickford to break the deadlock before Che Adams benefitted from a deflection less than 10 minutes later.

With 15 minutes left on the clock, Lucas Digne was dismissed – the second red card shown to an Everton player in successive weeks – for an awkward challenge on the Achilles of Kyle Walker-Peters.

The Toffees had gone into the game unbeaten across five league matches and had been top of the table heading into the weekend, however they struggled against Ralph Hasenhuttl’s well-organised side.

The home side came closest to taking an early lead with Nathan Redmond putting the ball wide from a weighted Ryan Bertrand cross, but the final shot did not test Pickford.

James Rodriguez showed no signs of the injury he sustained during the Merseyside derby last weekend, first curling a free-kick over the wall and straight at Alex McCarthy, then picking out a cross-field pass to Gylfi Sigurdsson, only for the captain’s 20-yard strike to clip the bar on the way over.

Southampton found the breakthrough goal in the 27th minute, Ward-Prowse capitalising after Everton failed to clear the ball following an earlier save from Pickford against Oriol Romeu.

The ball was fed back in to Danny Ings, who had a quick exchange with Ward-Prowse before the Saints captain fired past the Everton goalkeeper and into the far corner.

Before the break, Adams doubled the lead as he found himself unmarked inside the area and made no mistake when firing past Pickford with the help of a deflection off Sigurdsson to put the ball in the net at the near post.

Saints’ top goalscorer Ings picked out the number 10, recording two assists in a match for the first time in the Premier League.

Southampton appeared to have extended their lead further, but Staurt Armstrong’s powerful effort from the edge of the area was ruled out for offside just before half-time.

As the second half got under way, Alex Iwobi made way for Bernard as Everton looked to increase pressure on the home side and fight their way back into the game.

Redmond had an opportunity to add to his side’s lead at the start of the second period but his effort sailed over the bar without troubling Everton.

The visitors’ first real chance of the second half came in the 59th minute, but the ball from substitute Anthony Gordon was just behind Rodriguez in the centre of the area.

Ings had a chance to put the game beyond Everton, put their top goalscorer put the ball wide from an Armstrong cross.

Just as Everton looked to be building on periods of possession, Digne was shown a straight red card for a challenge on Walker-Peters, and Southampton had secured all three points.