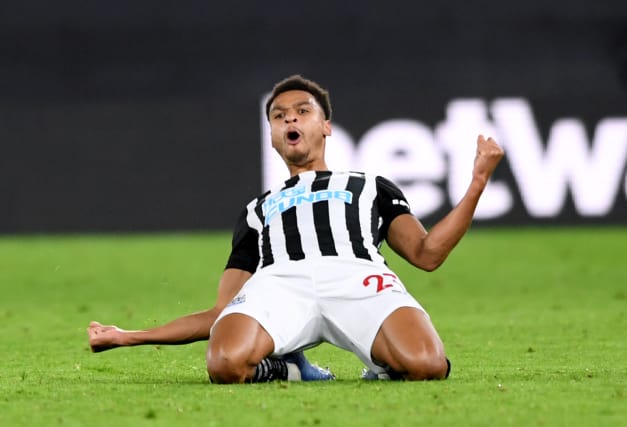 The winger scored his first Premier League goal for the Magpies in almost three years to clinch a 1-1 draw at Molineux.

Raul Jimenez’s excellent half-volley with 10 minutes left looked to have given dominant Wolves the points.

But Murphy’s leveller denied Nuno Espirito Santo’s side the chance to climb into the top four, while the Magpies remain well clear of any early trouble in 14th.

Newcastle were on the back foot for much of the game and the hosts were slicker throughout.

They underlined their intentions when goalkeeper Karl Darlow, a major injury doubt before the game, saved Daniel Podence’s low drive in the opening five minutes.

The forward also lashed over after Jeff Hendrick dawdled and lost possession.

Newcastle were tame but Max Kilman still had to block Callum Wilson’s angled shot after Murphy’s excellent pass slipped him in.

It was a rare opening for the visitors, with Wilson often isolated, but they slowly reined Wolves in to gain a grip of the game.

The hosts’ threat had waned after their bright start but Pedro Neto and Podence remained a danger with Jamal Lewis and Murphy often struggling to contain the widemen.

Wolves had greater quality and were sharper in possession but it was Newcastle who almost caught out keeper Rui Patricio when Allan Saint-Maximin’s shot clipped Nelson Semedo.

The hosts added to a remarkable stat after a blank opening 45 minutes and Nuno’s side have now failed to score in the first half of 58 games since returning to the top flight in 2018.

Not that it has held them back after two consecutive seventh-placed finishes and Neto tried to get the hosts going when he lifted Podence’s cross over five minutes into the second half.

Much like the first half, Newcastle relied on sporadic breaks and Miguel Almiron’s shot was blocked after good work from Murphy and Wilson on the hour.

And the visitors defended valiantly until Jimenez struck with 10 minutes left.

Neto’s deep free-kick was cleared to the striker, lurking on the edge of the area, and he cracked in a fine half-volley from 18 yards.

But there was still another late twist when, after Connor Coady felled Wilson on the edge of the box, Murphy curled a clever low free-kick around the wall and into the bottom corner with a minute left.