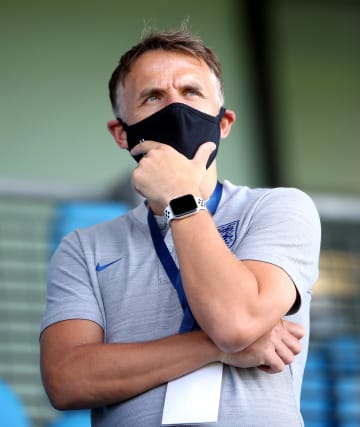 England Women’s friendly against Germany on Tuesday has been cancelled due to a positive coronavirus test for a member of the Lionesses’ backroom staff.

Phil Neville’s side were due to face the two-time world champions in Wiesbaden, their first fixture since the SheBelieves Cup in March.

Neville said: “While we all wanted to play Tuesday’s game, this was absolutely the right course of action. I thank Germany’s staff for their understanding and our FA colleagues for their support.

“I know the fans were hoping to see us play again but I am sure they will understand the decision.

“We have still had a good week of training and are looking forward to getting together next month before our match against Norway in Sheffield.”

The Football Association said the decision had been made to protect the well-being of players and staff, and cited current protocols which would require any individual who tested positive once in Germany to self-isolate for 14 days.

“We cannot take the risk that this may happen to a player or member of England staff,” a statement said.

With Tuesday’s game off, the remainder of the training camp at St George’s Park has also been cancelled, and players will return to their clubs on Sunday.

Their next fixture is against Norway at Bramall Lane on December 1.