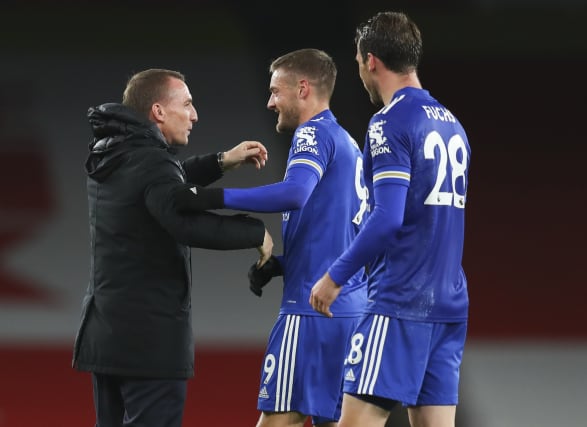 Brendan Rodgers hailed the impact of Jamie Vardy as he came off the bench to give Leicester their first away league win at Arsenal in 47 years and continue his fine form against the Gunners.

Having missed the last two games with a calf problem, Vardy was fit enough to be named among the substitutes at the Emirates Stadium and came on to head home the only goal of the game as the Foxes left north London with a 1-0 victory.

It was Vardy’s 11th Premier League goal against Arsenal – only Wayne Rooney can boast more – and gave Leicester a win in a game where they had to soak up plenty of pressure from the hosts.

Rodgers revealed after the game that he had always planned to give Vardy the final 30 minutes and had set up his side to be in a position for the 33-year-old to do the damage.

“The idea was always to bring Jamie on, he is always a huge threat and brings great confidence to the team,” he said.

“He is a world-class striker and he is up there for the ball to be squared to him.

“He is an incredible talent and we would have loved to have started him but he has been out with his calf which we just needed to make sure we nursed him back in.

“The plan was to still be in the game and then he can come in for 30 minutes and stretch the game for us.

“It is always the case, every game he looks like scoring and he is disappointed he doesn’t have another one because he was through one-on-one on a slight angle.

“It was a moment of real quality in the game. Youri (Tielemans) makes a perfect pass but it all came from the run. I’m always talking about people running in behind and Cengiz Under’s run was great.

“He squared it when he could have taken it himself and Jamie is there to finish – a brilliant goal to win the game.”

Arsenal had plenty of the ball during the game but were left ruing an early Alexandre Lacazette effort that was ruled out.

The France forward headed home a Dani Ceballos corner but the goal was chalked off as Granit Xhaka was deemed to have blocked Kasper Schmeichel’s view while in an offside position.

The decision left Arsenal’s bench perplexed during the game and manager Mikel Arteta was unhappy with the call of referee Craig Pawson and the VAR team.

Arteta said: “I’m really disappointed. We had it in our hands in the first half and I don’t know how the hell the goal was disallowed.

“To be fair I was really pleased with the first half and the way we pressed and the aggression we showed against a team that are very capable of breaking that pressure and creating chances against you.

“We were very on top of the game, we restricted them to nothing. We scored a goal from the set-piece, I don’t know how it got disallowed.”

To make the evening worse, Arsenal lost both David Luiz and Bukayo Saka to injury during the second half.

Arteta added: “We have lost a few players in the last week or so. David had a muscular problem and couldn’t carry on so we will have to assess him in the next 48 hours.”