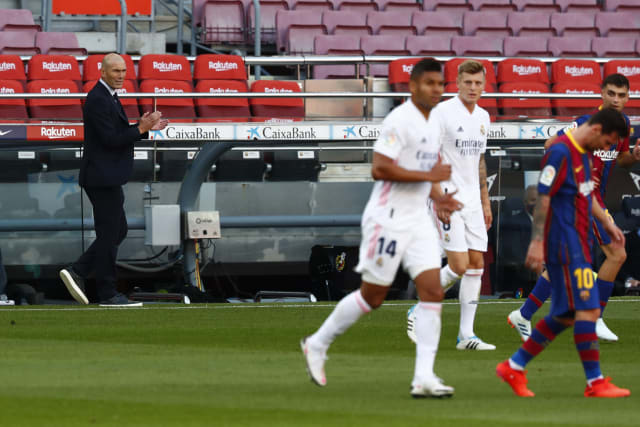 Both sides were out to respond on the back of shock defeats last weekend, which was followed by Zidane’s men losing 3-2 at home to Shakhtar Donetsk in their Champions League opener.

Los Blancos, though, produced the required response to their critics as Federico Valverde fired them in front after just five minutes.

Although 17-year-old Ansu Fati quickly equalised, it was Real who stepped things up in the second half.

Captain Sergio Ramos, returning to the team after injury, put the visitors back in front from a penalty on 63 minutes.

The award of the spot-kick, though, was controversial after Ramos tumbled following a tug by Clement Lenglet, and the referee reviewed the incident on the pitchside monitor.

Any hopes of a late rally from Barca ended when substitute Luka Modric added a third in stoppage time.

“I’m thrilled for the players. It’s a team victory. We put on a perfect display,” Zidane said afterwards, reported on the Real Madrid website.

“Taking all three points here is not easy. We had to think like a team and it was a great game to do just that.

“It’s only three points but at the same time, especially given the criticism we’ve faced recently, we have to stay calm, stick together and play when we have to play, just as we did today.

“We deserve it and I’m pleased for the players after all that’s been said in recent days.”

Zidane added: “I don’t know about (being criticised) unfairly. In the end that’s not going to change and we’ve talked about it several times.

“I’m proud of my team. I think we delivered a great performance.

“We aren’t here to silence people. We believe in what we do, being together when we have to be and that is what we did today.”

Zidane refused to be drawn on the VAR controversy.

“There’s a referee there. He went to watch the incident and then awarded the penalty,” the Frenchman said.

“He saw the incident and blew his whistle, and that’s all there is to it.

“Regardless of the penalty, I think we deserve the victory.”

Barcelona coach Koeman was taking charge of his first Clasico and the Dutchman felt an injustice at the award of the spot-kick in what proved to be a pivotal moment.

“It’s difficult to understand, we didn’t deserve to lose the game,” Koeman told a post-match press conference, as reported by Marca.

“The decision influenced the end result a lot. Up until the penalty, we were doing well.

“It had a big influence. I don’t understand VAR. I think there’s only VAR when it’s against Barcelona. These tugs always happen in the area.

“We are five games in and we haven’t benefited from (VAR) at all, we didn’t deserve to lose like this.

“I told (the referee) that, hopefully, someone can explain to me how VAR works in Spain.

“It wasn’t a penalty on (Lionel) Messi against Sevilla, neither for the two reds against Getafe. I asked him why there is only VAR against Barcelona.

“There’s a tug, but not enough to throw yourself to the ground like that. If you get tugged like that, you have to fall forwards, not backwards.

“It’s normal that Real Madrid players try to make the most of things because they get penalties. I don’t have a problem with that.

“The referee must decide, with VAR, if it is (a penalty or not).

“I don’t want to talk about it anymore, but it was a decisive moment in the game.”