Scott Parker determined to turn things around at Fulham 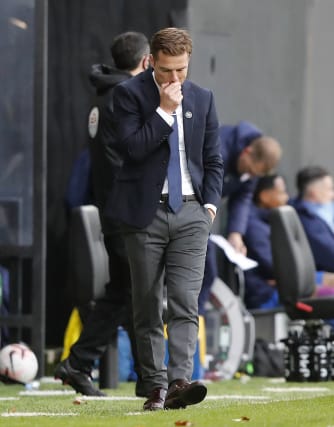 Fulham boss Scott Parker has vowed to give it his all to turn around his side’s dismal start to the season.

The Cottagers suffered a fifth defeat from six Premier League games as they went down 2-1 to Crystal Palace at Craven Cottage.

Parker’s men were in control of the game, but conceded a goal in either half to Jairo Riedewald and Wilfried Zaha as ruthless Palace took the points.

Tom Cairney struck in injury time but it could not mask a disappointing afternoon, which also saw Aboubakar Kamara red carded after referee Graham Scott changed his decision after checking the pitchside monitor.

There is no suggestion that Parker’s position is under threat, having guided the club to promotion last season, but he is not going to give up working hard.

“I can’t control that,” he said when asked about whether he feared for his job.

“What I can do is what I have normally done throughout my career and life, during these hard times, it is the time to front up and keep working as hard as I can to get the rewards that I deserve.

“It is out of my hands but I will keep working hard.”

Fulham started the game well but were undone on the counter-attack as Riedewald scored with Palace’s first attack.

They had chances to level, with Ademola Lookman hitting the post, but Zaha’s 64th-minute goal killed the game.

The Cottagers struck in injury time through Cairney’s fine strike into the top corner, but Parker said his side have to learn from this defeat.

“We are a young team, still trying to gel but there were some big positives today and this is when the chips are down you have to face up and keep working hard and I am sure we will come out of the other side,” he said.

“I felt we need to learn from exactly how this game panned out. We had a dominance but at times in the final third lacked a real intensity about us.”

Palace boss Roy Hodgson found himself talking about a familiar topic after the game as he was questioned about Zaha after the Ivorian bagged his fifth goal of the season and claimed an assist to boot.

“I came in to talk about our team’s performance, but I find myself talking about Wilfried Zaha again, which I am more than happy to do because he is doing so many good things for him,” he said.

“I am more than happy he has started this season so well, it is his fifth goal which is incredible, with an assist thrown into the bargain, and he is happy playing here.”

Palace are fifth in the table with 10 points from their six games, but Hodgson is not getting carried away even though they are ahead of Manchester City in the early standings.

“We are more than happy to have got 10 points from six games, I don’t think league positions after six games are any great importance,” he said.

“There is so much football to play, maybe at the halfway point it becomes more relevant, there will be so many twists and turns.

“Where Manchester City are doesn’t bother me, I’d like to be ahead of them at the end of the season, that’s for sure.”