Scotland game was business as usual for Finn Russell 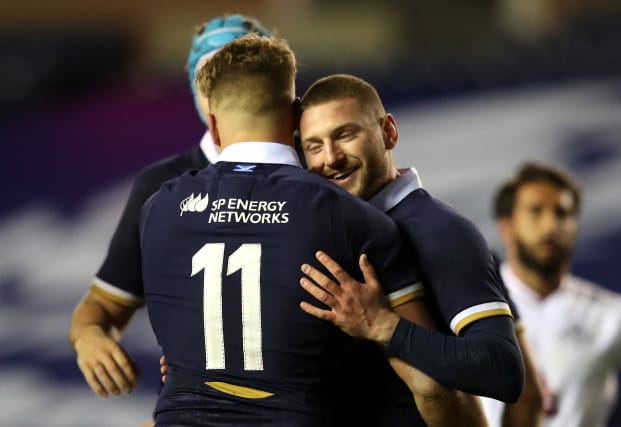 Finn Russell made a point of playing his normal game as he made his long-awaited Scotland return.

The Racing 92 fly-half came on for his first international appearance of the year 53 minutes into Scotland’s 48-7 friendly win over Georgia at BT Murrayfield on Friday.

Russell had to wait more than a year to earn his 50th Scotland cap after dropping out of the reckoning ahead of the Guinness Six Nations following a breach of discipline and a damaged relationship with head coach Gregor Townsend.

With relations fixed, Russell out himself firmly in the thoughts of Townsend’s thoughts ahead of next Saturday’s Six Nations finale against Wales.

The former Glasgow player came on at fly-half with his ex-Warriors team-mate Adam Hastings moving to the centre and he gave Scotland an extra edge to their play with his sharp passing, setting up a debut try for Duhan van der Merwe.

But Russell said: “I wasn’t trying to show anything or do too much. I just went out there and played my game.

“I went out there and had some fun, that’s what I showed, when you mentioned me smiling, me having fun.

“It wasn’t about me saying this or that. It’s a team game, and I will be supporting them as much if I’m on the bench and Adam or anyone is in the team.”

Russell appeared to be enjoying himself with television cameras capturing his smile on several occasions.

“That’s the way I play, I am always smiling, I always enjoy being out there,” he said.

“Even if that wasn’t my 50th or my first game back since the World Cup after a frustrating time, you would have seen the same smile.”

Russell joined the camp later than most of his international team-mates after playing for Racing in the Heineken Champions Cup final, and decided to take a low-key approach ahead of his first game back.

“I came in and, didn’t take a step back, but I don’t want to come in and start saying ‘let’s do this and let’s do that’.

“We had a pe-match chat and I usually say what I think going into the game and things we can potentially look for.

“But it wasn’t me that was driving the game so I didn’t say too much, I didn’t get too involved.

“I just went round and had a chat to the subs and talked about what we might do and while watching the game how the plan might change.

“I was more focused on making sure the subs were ready instead of me trying to chat in the huddle and trying to say too much. I left that to the other boys who were starting.”