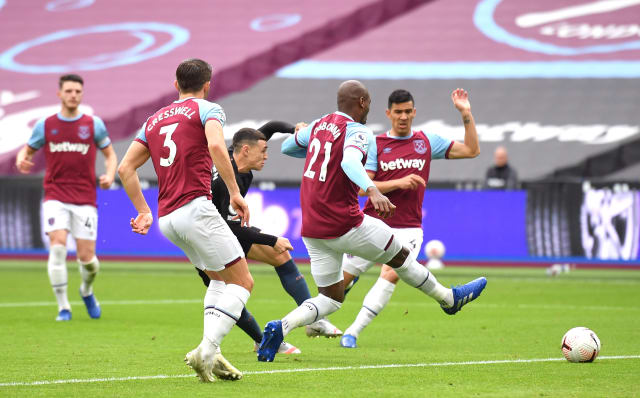 Manchester City fought back with a second-half goal from Phil Foden to earn a 1-1 draw at West Ham.

The Irons – who recovered from 3-0 down to draw against Tottenham with a dramatic stoppage-time equaliser from Manuel Lanzini – went in front after 18 minutes through an acrobatic bicycle kick from Michail Antonio.

The 20-year-old was in the right place to convert a cross from Joao Cancelo after 51 minutes.

The visitors sent on fit-again Kevin De Bruyne for the closing stages and continued to dominate, but could not conjure a winner.

In Saturday’s only 3pm kick-off, Crystal Palace won 2-1 at bottom club Fulham to move fifth in the table.

The Cottagers, with only one point so far on their return to the top flight, went close to an equaliser when Ademola Lookman’s effort struck the post and Aleksandar Mitrovic put the rebound wide in front of an open goal.

Palace doubled their lead in the 64th minute.

Andros Townsend sent Michy Batshuayi away down the right and the Belgian forward fired over a low cross which Zaha knocked in at the far post.

Fulham finished with 10 men when substitute Aboubakar Kamara was sent off for a high challenge on Eberechi Eze, which referee Graham Scott reviewed on the pitchside monitor having initially shown a yellow card.

In stoppage-time, Zaha’s close-range effort was ruled out for offside before Fulham midfielder Tom Cairney crashed in a 25-yard consolation goal for the home side.