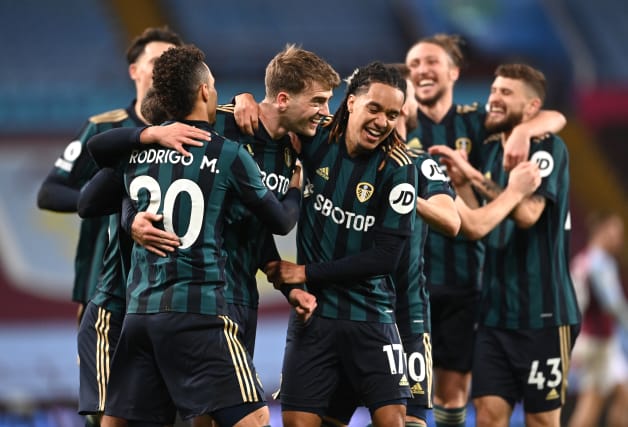 Marcelo Bielsa believes the togetherness of his Leeds players was a major factor in their comprehensive victory against Aston Villa.

The Whites boss saw his team sweep aside previously unbeaten Villa, who were looking to win their opening five league matches for the first time in the club’s 146-year history, on Friday night thanks to a Patrick Bamford hat-trick.

Leeds had 27 shots during the game at Villa Park, with nine on target, and Villa boss Dean Smith openly conceded afterwards that his side had been second best and “lucky” to only lose 3-0.

“We’ve been together as a group for two and a half years now so the group is homogeneous,” said Bielsa.

In contrast, Smith’s somewhat new-look Villa squad, which showed five summer signings in the starting line-up against Leeds, has been assembled amid a vast turnover of players across the last 14 months.

“It makes it easier for everyone to assimilate their roles in the team, but it takes time” said Leeds boss Bielsa.

“For example, (right-back) Luke Ayling played in central defence. He was quick, he was agile. He defended well, he headed well. He used the ball well and he transmitted serenity to the rest of the team.”

“Nevertheless he is not an easy player to neutralise.”

Villa had made their best start to a league season since the 1930-31 season, winning their opening four Premier League games.

Following a first league defeat of the campaign, Smith insists the challenge now is for his players to pick themselves up and react positively.

“I’d have bitten someone’s hand off to have this start. I’m disappointed that we had the opportunity to go top of the league and have a five-match unbeaten run,” said the Villa boss.

“It’s our job now to go on another run. It’s how we bounce back from this now. It’s disappointing and frustrating but I can only question my players for 40 minutes of this season so far.”

Ross Moriarty withdraws from Wales squad due to ankle injury