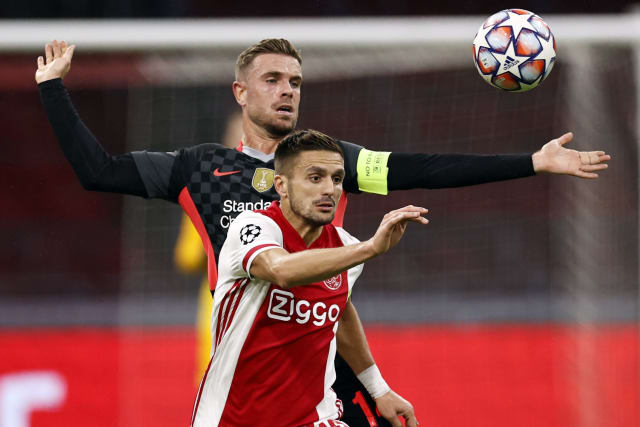 Ajax set a new Eredivisie record with a 13-0 away win at 10-man VVV-Venlo while Real Madrid claimed a 3-1 victory in El Clasico against Barcelona at an empty Nou Camp.

Lassina Traore scored five goals as Ajax shrugged off their midweek Champions League defeat by Liverpool to move back top of the table.

Jurgen Ekkelenkamp opened the scoring after 13 minutes before Traore hit a double and Dusan Tadic made it 4-0 at half-time.

The home side saw defender Christian Kum shown a straight red card six minutes into the second half, with Ajax then scoring an incredible nine more goals.

Traore completed his hat-trick in the 54th minute, capitalising on a mistake by beleaguered Venlo goalkeeper Delano Van Crooy, with Brazilian forward Antony adding a sixth.

Ekkelenkamp got his second and then Daley Blind scored the eighth on the hour, with Traore making it 9-0 before substitute Klaas-Jan Huntelaar scored twice in the space of two minutes, one from a penalty.

The Amsterdam side soon had a 12th through Lisandro Martinez’s long-range effort before Traore completed the rout with three minutes left.

Ajax’s tally bettered their own previous record 12-1 victory over Vitesse in May 1972, and sent them back to the top of the table above PSV Eindhoven.

In LaLiga, Real Madrid returned to the top of the table as they celebrated a memorable win over their fierce rivals.

Both teams had suffered shock defeats last weekend, with Zinedine Zidane’s side then beaten 3-2 at home by Shakhtar Donetsk in their Champions League opener on Wednesday night.

Los Blancos went ahead through Federico Valverde after just five minutes, only for 17-year-old Ansu Fati to quickly equalise.

Sergio Ramos put Real Madrid back in front from the penalty spot on 63 minutes, which was awarded after the referee reviewed a shirt pull on the pitchside monitor, before substitute Luka Modric added a third in stoppage time.