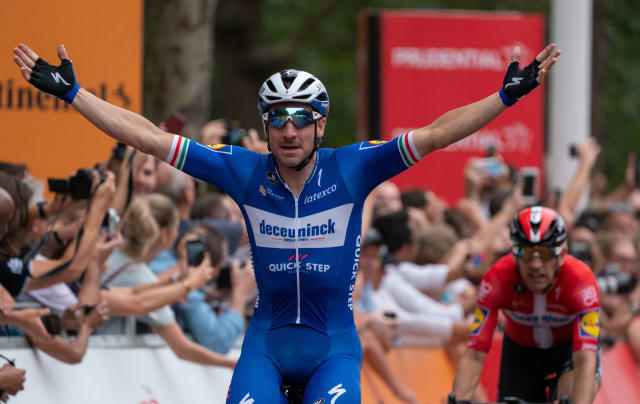 Less than a month after leading home the final stage of the Tour de France on the Champs-Elysees, Bennett was launched by his Deceuninck-Quickstep team to pip rival Jasper Philipsen (UAE Emirates) over the line.

Bennett said: “We said we needed to come together at one point and the team did the job perfectly – they all came together when they needed to.

“I went for the outside and Jasper Philipsen came up the inside and got such a jump I actually didn’t think I’d be able to catch him.

“But in the end I started getting more and more speed and I was still accelerating to the line.”

Jakub Marecko (CCC) and Pascal Ackermann (Bora-Hansgrohe) took second and third places respectively on a day which did not impact the top of the general classification, with Primoz Roglic (Team Jumbo Visma) maintaining his five-second lead over Daniel Martin (Israel Start-Up Nation).

Britain’s Harry Tanfield (AG2R La Mondiale) had featured prominently in a four-man break which went clear early in the stage and held its advantage until around 15km to go, when they were finally swallowed up by the bunch.

It set the scene for the first sprint finish of this year’s race, with the Bora-Hansgrohe team first to assert themselves before Bennett’s team-mates stepped up to secure the Irishman another stage win.