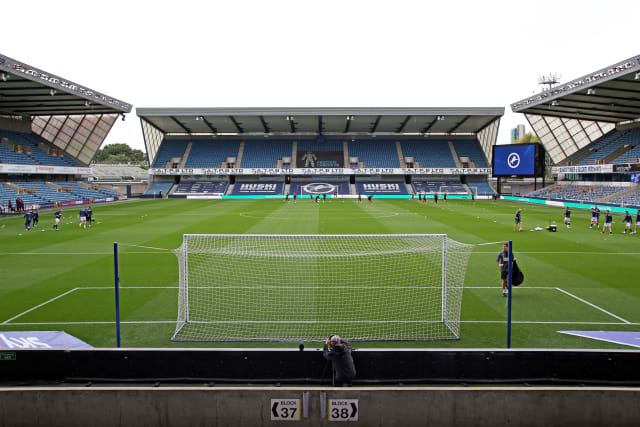 Millwall have defended their decision to allow fans into hospitality areas to watch matches on television, with the Londoners saying they and other clubs “have been left to fend for themselves” during the coronavirus crisis.

The Government opted not to allow fans back into sports venues from October 1 because of a rise in coronavirus cases nationwide, forcing clubs to look at other ways to bring in matchday revenue.

The Lions will welcome around 80 fans into their hospitality areas at The Den to watch the Sky Bet Championship game against Barnsley on Saturday on TV screens, but will be blocked from directly seeing the action taking place just metres away from them.

Other outfits are planning similar initiatives, including Norwich and Brentford, and Millwall insist they are “imperative” for clubs starved of regular revenue from match-going supporters.

A Millwall statement read: “This initiative is designed to get fans back into hospitality areas inside our ground, albeit in small numbers, in an enjoyable but safe and Covid-secure environment.

“It’s incredibly important for us as a club that supporters are engaged in what is happening out on the pitch while they can’t attend matches in a more regular fashion, and such schemes are also imperative from a financial point of view at a time of much instability and uncertainty.

“It is a positive step in the right direction for football clubs – community assets – who have been left to fend for themselves throughout this crisis.”

Many within football have questioned the logic behind allowing indoor activities to resume amid the crisis while football fans remain barred from stadiums, including Manchester United executive vice-chairman Ed Woodward.

“If people are allowed to sit in a plane for hours, or in the cinema, or even watch football in a cinema why not outside in a stadium environment which is professionally managed and controlled?” he said earlier this week.

“If indoor concerts are allowed, why should outdoor, socially-distanced football fans be treated differently? Fans are the bedrock of this game and some of the inconsistencies out there are frustrating for them and for the clubs.”

The Department for Digital, Culture, Media and Sport has been approached for comment on the situation at Millwall and other clubs.

Millwall are understood to be confident that they will face no action over staging these events, because they have been signed off by the safety authorities.

The EFL rejected a £50million rescue package of grants and loans from the Premier League last week, on the grounds that it “fell some way short” of what was needed and that it was intended for League One and Two clubs only, and not the Championship.

The Premier League said the offer of support would remain on the table and that it would engage with any EFL club – even those in the Championship – who needed urgent financial support as a result of the pandemic.