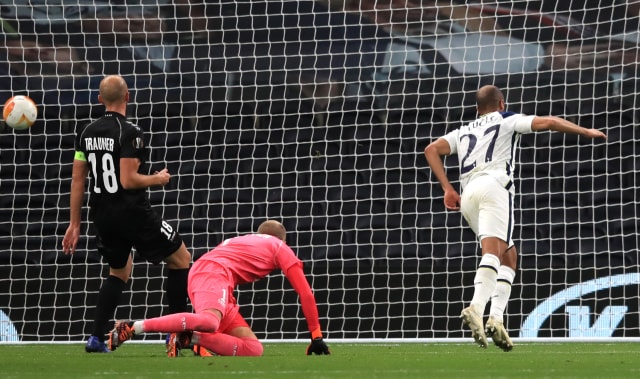 Lucas Moura was happy to take rent off Carlos Vinicius for staying at his house by way of an assist in the 3-0 Europa League win over LASK.

Vinicius was making his Spurs debut and he made an impressive start, setting up Moura for the first goal and then also laying on Son Heung-min’s late effort as the hosts had a comfortable evening.

It was fitting that the striker combined with Moura for the first goal as Moura has taken his Brazilian compatriot under his wing following his loan move from Benfica.

Vinicius does not speak much English and stayed with Moura for five days after making the move earlier this month.

“I’m helping him especially with the language,” Moura said. “It’s very hard when we don’t speak the language and understand.

“It’s normal between us, the Brazilian guys. We’re very close, he stayed at my home the first five days.

“Now he found a house and has his family with him.

“Yes, I helped him. He’s a very good guy, very humble and I’m happy he’s here with me.”

Only a goal against the Austrian side would have made Vinicius’ debut better and he would have had one had Andres Andrade not put through his own net when the striker was ready to pounce.

Spurs have been looking for a second striker to take the load off Harry Kane for some time and Moura thinks they might have found their man.

“He was very important, he’s a very good player, I’m very happy for him,” he said.

“He did very well with two assists and he made a good game. He’s the kind of player we were missing in our squad, he’s a real number 9 and for sure he will help us a lot. I’m happy for him and to have another Brazilian in the squad is good for him.

“It would be interesting to see two big players. Harry Kane is a top star and yes, I think they can play together. They are both intelligent players, it depends on the coach and the team but yes they could play together.”