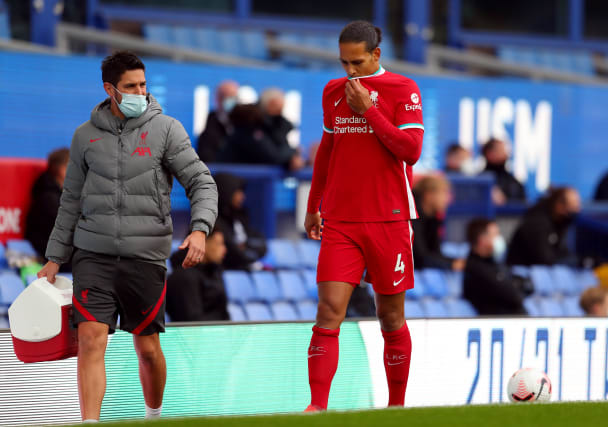 Liverpool manager Jurgen Klopp admits he does not want to know how long he is going to be without key man Virgil Van Dijk.

The Holland international faces several months out after damaging an anterior cruciate ligament in last weekend’s Merseyside derby and is awaiting a date for surgery.

Klopp now only has two fit senior centre-backs in Joe Gomez and Joel Matip, with midfielder Fabinho providing cover as he did so impressively in the midweek Champions League victory over Ajax, and has to find solutions to lessen the Dutchman’s absence.

Liverpool have refused to put a timescale on how long Van Dijk will be out but have not yet ruled him out of the whole season.

“We don’t even want to know it, to be honest. It will take time, that’s clear,” said Klopp.

“I think it makes sense from a specific moment in the recovery, in the rehab time, that it becomes individual because then everybody copes differently with it and each body. That’s why (there is) no need for (a timeframe).

“Virgil was here, he’s OK. But about when the surgery will happen and stuff like this, I don’t think it makes sense that we give pretty much a time schedule every day.

“But it will be fine and will happen in an appropriate time. So, that’s it pretty much – he is as good as possible.”

Klopp is hoping for some good news on the injury front ahead of Saturday night’s visit of Sheffield United with potentially the best being on goalkeeper Alisson Becker.

The Brazil international has missed the last three matches with a shoulder problem sustained in training at the start of this month but appears to be ahead of schedule in his recovery, having returned to light training this week.

Late fitness checks will also be made on midfield duo Thiago Alcantara (knee) and Naby Keita, and Matip (the latter two with minor knocks) after all three missed the trip to Amsterdam.

“Apart from Ox (Alex Oxlade-Chamberlain) and Virg, obviously, and maybe Kostas (Tsimikas), who gets closer and closer but is not at all in contention for this game or the next one,” said the Reds boss when asked about who was available.

“All the others, we have to see day by day pretty much. It’s a lot of conversations with the medical department – for who it makes sense, for who it is too early and all these kinds of things.

“That’s the time we are in with the games we have; if somebody is injured for two weeks that could mean five games and it is still not a serious injury.

“So, I don’t know in this moment who will be available. My last information was that the boys who played the other night, they are all fine.

“They are OK and the rest, we will see.”

Liverpool are likely to come up against former striker Rhian Brewster, whom they sold to Sheffield United on deadline day.

The highly-rated 20-year-old was sold for £23.5million with first-team opportunities limited following the arrival of Portugal international Diogo Jota.

Klopp said: “We all know him very well and that’s the problem – we know how good he is! That’s the situation.

“How always with a boy, especially like Rhian who is really our boy – OK, maybe I have to say ‘used to be our boy’ – it means always I wish them really the nearly perfect Premier League season.

“If Rhian is on the pitch we know we should not let him finish at all because wherever he gets the ball he is a natural finisher and that’s his biggest threat.”