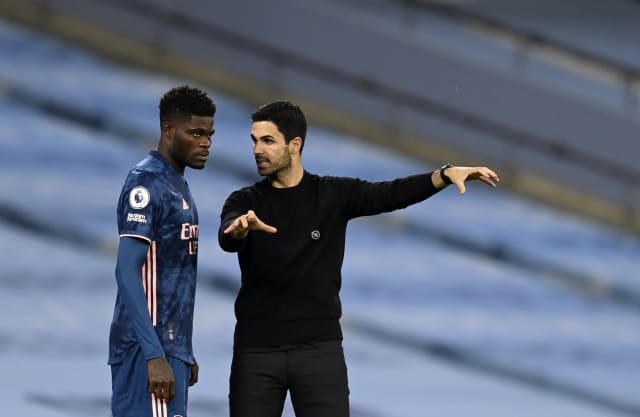 Mikel Arteta heaped praise on Thomas Partey after he impressed on his full Arsenal debut in their comeback Europa League win over Rapid Vienna – but insists there is much more to come from the deadline day signing.

Partey’s performance was a highlight on what was an average night for the Gunners in Austria, as goals from David Luiz and Pierre-Emerick Aubameyang saw them win 2-1 after Bernd Leno’s error had gifted the hosts a second-half lead.

The 27-year-old Ghana international had been a long-term target for Arsenal before they finally landed their man from Atletico Madrid in the closing hours of the transfer window.

He made his debut off the bench in Saturday’s Premier League defeat at Manchester City but was comfortable from the outset on his first start.

“To be fair he looked really solid, really comfortable,” Arteta said after his side won their Group B opener.

“I think he held the midfield by himself in the second half as well when we were a little bit more open and we started to take more chances attacking certain spaces with some players.

“But I think he was fantastic tonight and there is much more to come from him obviously.

“Obviously we know that with the price that we paid for him and the profile that he has, he is going to have a lot of people looking at him in every single game.

“But it’s about the structure we have as a team, the flow, the unity and the cohesion that we need in our team and he is one piece of that. Hopefully he is a big piece.”

Arsenal were poor for the first hour of the game, culminating with Leno presenting possession to the opposition as he looked to play out from the back and Taxiarchis Fountas putting Rapid ahead.

Leno’s confidence was clearly knocked and he made two further mistakes that, fortunately for Arsenal, did not lead to goals.

Instead they rallied and struck twice in four minutes, Luiz heading in a Nicolas Pepe free-kick before Aubameyang – who came off the bench 13 minutes earlier – combined with fellow substitute Hector Bellerin to turn home a 74th-minute winner from close range.

After the game, Arteta defended Leno and says his side playing out from defence is a tactic that is here to stay.

“We made it a little bit harder with some decisions we made and the goal we conceded, which if anything is obviously my fault because I demand that we do those things,” he added.

“It is a part of our game model. We need to understand when we can do it and when we should kick the ball to the stand.

“He (Leno) has the courage to do it, we have been very successful at doing it as well with the amount of goals we have scored even in important games.

“They will understand better and better the type of balls that we have to play in those areas and in relation to where the pressure is coming and the type of distances you can manage from the opponent.

“It is something we have to keep working on because if we want to play the way I want to, it is necessary that the goalkeeper is involved in our build-up play.”

Rapid coach Dietmar Kuhbauer felt the performance of his side was worthy of more.

“We deserved a point,” he said.

“I’m really proud. We mustn’t forget who we played against. Arsenal have a lot of quality.

“I hope our performance is a signal to my team that we can compete against any opponent.”