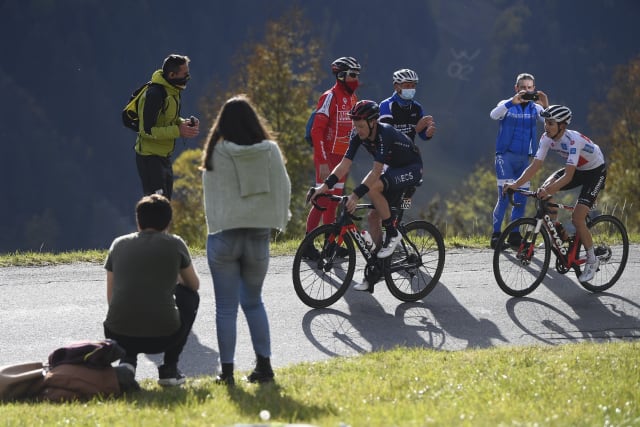 Tao Geoghegan Hart vaulted himself to within 15 seconds of the pink jersey as the Giro d’Italia exploded on the slopes of the famed Stelvio.

Jai Hindley nicked the stage 18 victory from the Londoner at the line while the Australian’s Team Sunweb team-mate Wilco Kelderman took pink off the shoulders of Joao Almeida, but a dramatic day left the race delicately poised going into the final weekend.

Kelderman may have inherited the lead but he too struggled, finishing two minutes 18 seconds behind his team-mate, and the fight for pink could yet be a battle between two riders who came to the race as domestiques.

Hindley sits 12 seconds off pink, with the Ineos Grenadiers’ Geoghegan Hart sitting menacingly in third after a day in which he came of age as a Grand Tour rider.

Inevitably it was the snow-covered Stelvio, the highest paved mountain pass in the eastern Alps at 2,757m, that provided the stage for a dramatic change of the script.

Almeida, resplendent in pink since stage three on Mount Etna more than two weeks ago, faded early on this 25km slog to the summit and others – Vincenzo Nibali and Jakob Fuglsang amongst them – soon followed.

As Rohan Dennis put the power down for Geoghegan Hart, the bigger surprise came when Kelderman was dropped with nearly 10km of the climb still to come.

Hindley did not wait for his team-mate, determinedly sticking to the Ineos pair to the top.

The young Australian had more drama as he struggled to put on his jacket, almost crashing his bike at one point, before wrestling his arm in.

But neither he, nor Kelderman behind, could zip up their jackets before the top – setting off on to the high-paced descent exposed to the biting cold with wind chill putting the temperatures below zero.

Kelderman crossed the summit some 46 seconds after the leading group, Almeida almost three minutes further back, though he would claw some of that back on the way down.

But as they hit the valley approaching the next climb, Kelderman quickly went backwards, overtaken by a recovering Pello Bilbao and Fuglsang as Geoghegan Hart and Hindley – two supposed domestiques – thought about battling for pink.

A scrapping performance from Kelderman would deny them that, but with such narrow deficits covering the top three, the race is wide open now.

Bilbao sits fourth, one minute 19 seconds down, while Almeida dropped to fifth, two minutes 16 seconds down.

A bunch sprint is expected on Friday’s relatively flat stage 19 to Asti before another mountain test to Sestiere on Saturday, though stage 20 has been watered down due to enforced chages to the route.

The winner, however, will not be known until after Sunday’s closing time trial in Milan.