Stuart McInally has helped me get where I am, says Scotland captain Fraser Brown 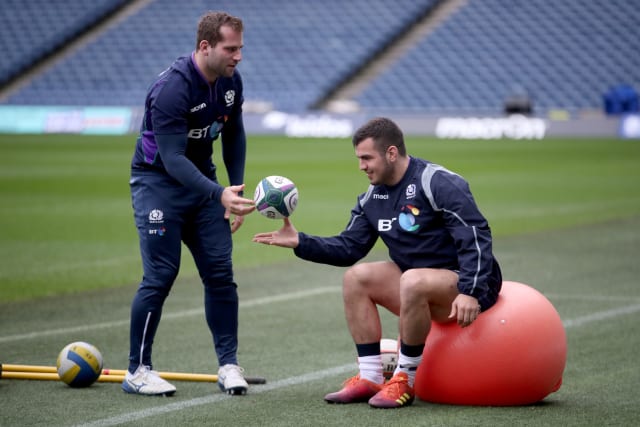 Fraser Brown has thanked Scotland rival Stuart McInally for pushing him all the way to the honour of captaining his country.

The Glasgow hooker will lead out the Dark Blues for the first time on Friday when Georgia visit Murrayfield for the Scots’ first Test match in seven months.

McInally had the armband last year after being named skipper ahead of the World Cup in Japan.

But it proved in the end to be a burden for the Edinburgh forward, who was on the bench for the side’s final game as they bowed out to the hosts. Greig Laidlaw resumed the leadership duties in Yokohama while Brown was handed his number two jersey.

And he has largely held on to it, starting three of the four games Scotland have played since their return from the Far East.

But the 31-year-old insists he would never have made it this far had it not been for the pressure McInally put him under as he sought to reclaim his place.

Brown – who is deputising for Stuart Hogg while the Exeter player looks to make it a Champions Cup and Premiership double against Wasps this weekend – said: “I think people always say it but I don’t think people always necessarily believe it when they say they enjoy competition.

“But it genuinely is great for both myself and Stuart. We’re building depth and I see it as a good thing. I enjoy the competition.

“It annoys me and I’m sure it annoys Stuart when you’re not getting picked or someone else is picked ahead of you because it forces you to look at things you’re doing or things you’re not doing quite so well and try to develop them.

“It focus you more as it makes you realise the more you push yourself and enjoy what you do, the more you’ll find yourself in a better position to play well.”

It is not just the competition with McInally which Brown has had to overcome to make it to this point.

Captaining his country seemed an impossible dream when Brown was starting out his professional career with Edinburgh as injuries and a battle with depression threatened to derail his career hopes for good.

But he is firmly back on track now, with Townsend claiming the Warriors forward is in the form of his life.

However, Brown will not be looking back when he marches out into an empty Murrayfield on Friday night.

“It’s an enormously proud moment,” he said. “But have I paused to reflect on where I’ve come from? No not really – that was a long time ago.

“A certain part of that was a previous part of my life which has been a big part in shaping who I am and how I see things now.

“Other more recent things like injuries, they are just part of rugby. I’m pretty laid back about how I view that part of my career.

“My approach to how I see things functioning within a group of guys and how to try to get the best out of people, it helped shape that too.

“But in terms of looking back to where I was and where I am now, I don’t tend to do that very much, if I’m being honest.”

The Georgia Test is the Scots’ only chance to shake off rust before they finally bring the curtain down on this year’s Covid-disrupted Six Nations campaign against Wales next Saturday.

“It’s important for a number of reasons,” added Brown. “It’s the first chance we’ve had to play for Scotland for seven months, which is a big thing.

“It’s a Test match against a really good team who will pose us a lot of challenges up front from a physicality point of view.

“And running into the conclusion of the Six Nations, it’s important that we hit the ground running and continue developing where we left off in March.”