Hakim Ziyech plans to do talking on the pitch at Chelsea 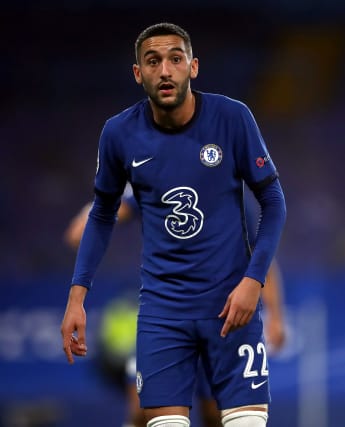 Hakim Ziyech has pledged to stick to his outspoken nature at Chelsea.

The Morocco winger is chasing full fitness after a knee injury slowed his initial progress following his £40million summer transfer from Ajax.

The 27-year-old has never pulled any punches with his public comments, in the past standing firm against criticism from Holland great Marco Van Basten.

Van Basten hit out at Ziyech for choosing Morocco ahead of Holland, while the forward struck back by branding the 1980s Ajax star “a big name but not a top coach”.

Ziyech is relishing his role in Chelsea’s £220million summer revolution under Frank Lampard, but insisted he will stay true to himself in a bid to thrive at Stamford Bridge.

Asked if his outspoken approach with Van Basten had held him back in the past, Ziyech said: “I don’t know, I said what I said at that time.

“That was just the way I was looking at it and I’m not afraid to have my opinion and I always speak from my heart, and what I am feeling I am just saying.

“I don’t really care what people think about that. They can take it how they want to take it.

“At the end of the day if you perform on the pitch that’s why most of the clubs are buying you or not. I took my time, I didn’t want to rush myself to go to another club early or at the youngest age.

“I took my time to improve and grow as a person, and now I am 27 and now is the time to move on.”

Ziyech starred as Ajax reached the 2019 Champions League semi-finals, only for the Amsterdam giants to be floored by Tottenham in a last-gasp defeat.

Now settling into life at Chelsea, the richly-talented assist king believes Lampard’s Blues can quickly build the ability to compete in the latter stages of Europe’s top-tier club competition.

Asked if Chelsea are ready to go beyond Ajax’s 2019 exploits, Ziyech replied: “Yeah hopefully we are and that is a process that we are in right now.

“In the beginning when I came new to Ajax it was good and bad, in the way of playing, so it is a process of building right now and we just have to be patient and everything will work out.

“We have to believe in things and that is what I am doing and from that side I am looking only forward and hopefully we can achieve what I achieved in the last two years.

“It wasn’t a surprise to me that Chelsea made so many signings, they told me already that I will not be the only one, because they had a ban for two years.

“So I knew for myself already that I will not be the only one. And for me it’s I think also only good to have more new players, more different styles. Competition makes every player better.”