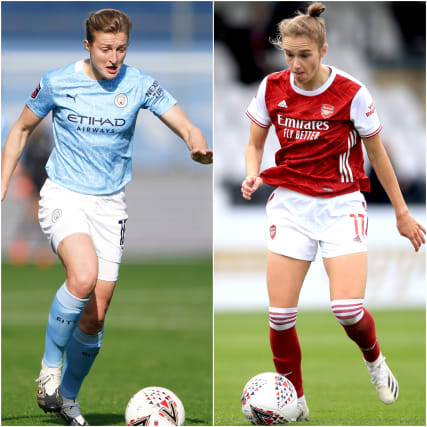 The Arsenal forward struck a hat-trick against Tottenham on Sunday to make it 52 goals in just 50 appearances for the Gunners, putting her top of the WSL’s all-time scoring chart.

Miedema, 24, had previously shared the record of 49 with Nikita Parris, while Manchester City’s White is one further back.

White said: “Obviously it’s incredible stats. She’s come into the league and (achieved) phenomenal stats for Arsenal and she’s still quite young as well. I’m sure she’s got many years in front of her. It’s an incredible achievement and definitely one I’m chasing as well.”

Dutch international Miedema, who has already scored 10 goals this season, is one of the biggest names in the WSL, and the league’s star power increased substantially during the summer with an influx of top talent, particularly from the United States.

Bronze, Lavelle and Mewis are all team-mates of White at City, and the 31-year-old hopes a stronger league will help the England national team as well.

She said: “Sam and Rose are the most lovely people you could ever meet, so we’re very privileged to have them in our squad and what they bring is that competitiveness, that winning mentality.

“It’s great to have them in our league, the profile of our league getting bigger, more people wanting to watch our league in America and across the world. To be training alongside the best is only going to improve us and hopefully it really helps our national team as well.”

City have an FA Cup final against Everton to look forward to on November 1, but first White’s attentions are on England and next Tuesday’s clash with Germany in Wiesbaden.

Phil Neville’s squad have been training together at St George’s Park this week, with youngsters Millie Turner, Esme Morgan, Niamh Charles and Ella Toone all given second call-ups.

The core of the squad remains hugely experienced, with White, the joint top scorer at last summer’s World Cup, a central figure.

She said: “We’ve got a really lovely group. The young players are always wanting to learn, to be competitive, be better and better. For us more experienced players, we like being driven, we want to develop as well, so they’re always pushing us too.

“Ultimately that’s going to make our team better. It is really exciting that we’ve got so many youngsters coming through that are so talented, and also they’re great people as well, which is a key factor in a winning culture.

“I want them to do great things. When I do retire, I want them to go on and play in major tournaments, win things, and I’ll be there cheering in the crowd.”

White scored England’s goal in a 2-1 defeat by Germany at Wembley last November, when they were dealt a sucker punch by a last-minute winner in front of a record crowd.

England have not played an international fixture since March, and White is looking forward to seeing how they match up.

“I’m very patriotic, I always love playing against Germany and what those games bring is competitiveness – they have some incredible players and it’s always a tight game,” she said.

“They’re the second best team in the world so it’s great for us to be playing against the best and seeing where we’re at. Obviously we’re coming off the back of a global pandemic lockdown so it’s a big game for us. It’s exciting.”