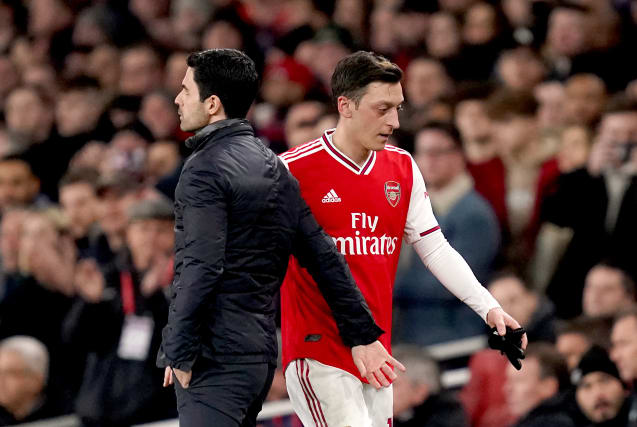 Ozil released a statement on Wednesday saying he was “deeply disappointed” not to have been included in the 25-man group and believes his loyalty to the club has not been reciprocated.

The 32-year-old is the highest-paid player in Arsenal’s history but has now been omitted from both the Premier League and Europa League squads.

Ozil has not played a single minute for the Gunners since March 7, having initially been a mainstay of the team following Arteta’s appointment last year.

“This is a difficult message to write to the Arsenal fans that I’ve played for over the past few years,” Ozil wrote in a statement posted on social media.

“I’m really deeply disappointed by the fact that I have not been registered for the Premier League season for the time being.

“Upon signing my new contract in 2018, I pledged my loyalty and allegiance to the club that I love, Arsenal, and it saddens me that this has not been reciprocated.”

Arteta’s side face Rapid Vienna away in their Europa League opener on Thursday night and the Spaniard took full responsibility for Ozil’s absence as he said only football reasons were taken into account in making the decision.

“Everybody is free to express his feeling,” he said.

“What I can say from my side is that it is just a football decision. My conscience is very calm because I have been really fair with him.

“My level of communication with him has been really high and we know what to expect with each other.

“Obviously a player of that dimension, with the career he has had, everything that happens around him has a big impact. It has been the case for the last eight years, it is nothing new that is just happening now. A lot of things have happened over these eight years.

“My job is to get the best out of every player, to contribute to the team performance. Here I feel at the moment, today, that I have failed.

“I want the best possible Mesut for the team. And in some moments I was able to get close to that, and at the moment I have not been able to do it because I have to make the decision to leave him out of the squad.”