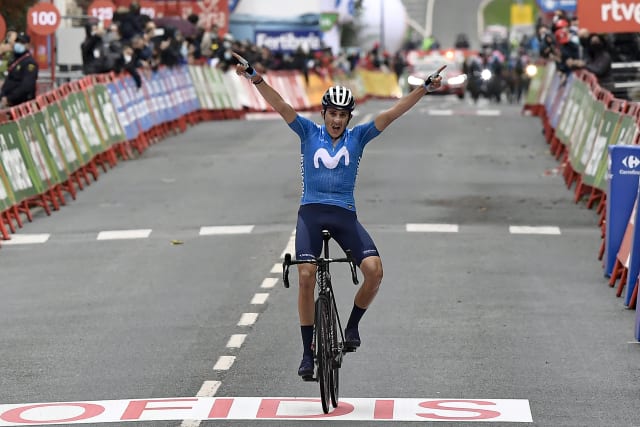 A late solo attack from Marc Soler saw the Movistar rider claim victory on stage two of the Vuelta a Espana, with Primoz Roglic retaining the red jersey.

Soler made his move on the final descent in Lekunberri, Pamplona to overcome the windy conditions and claim a maiden Grand Tour victory.

Spaniard Soler had safely navigated a group of horses which came out of the trees on the roadside to attack the breakaway around 14 kilometres out and finished 19 seconds ahead of Roglic and Ireland’s Daniel Martin.

“This was a stage we really wanted to win and we had studied the roads this week,” Soler said to reporters following his victory.

“This is my first win in a Grand Tour and I’m very happy about that.

“It pays us back for all the hard work done during what has been a very difficult year. It is great for all the team and I can only thank them for their support.”

“It was a hard day, nervous because of the wind and a hard climb at the end, but our team did again a good job controlling the whole day and they keep me in the right position,” Roglic said.

“In the climb, it was a hard pace. Soler went away – he deserved to win.”

Froome sits down in 85th place, almost 30 minutes behind the leader.

The four-time Tour de France winner, riding his final race for the Ineos Grenadiers, had been more than 11 minutes off the pace following Tuesday’s opening stage.