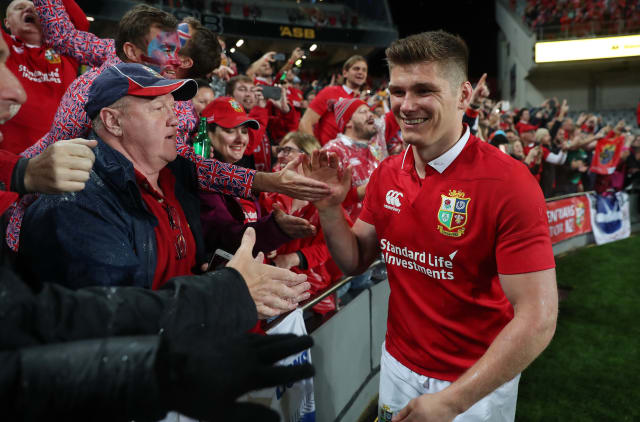 The interest in the British and Irish Lions 2021 South Africa tour is “off the scale” and organisers remain optimistic that fans will be in the stadiums, according to managing director Ben Calveley.

On Wednesday morning, it was announced the Lions will play Japan at Murrayfield next summer in a curtain-raiser Test match ahead of the series against the Springboks.

The confirmed June 26 date is the same day as next season’s Gallagher Premiership final, a week before the Lions’ tour opener in Cape Town, and will be subject to any Covid-19 restrictions which may be in place at the time.

Calveley, though, feels the Lions should remain “optimistic” over the prospect of being able to give fans a chance to watch what would be a first Test appearance on British or Irish soil since playing Argentina in Cardiff 15 years ago.

“What is clear is that the interest in the Lions is off the scale, it is considerably higher than we have seen for previous tours,” Calveley said.

“Our approach is to focus on ‘Plan A’, which is working in partnership with the South African Rugby Union to make sure we are ready to deal with whatever Covid environment we find ourselves in next summer.

“The reality is nobody can tell me with absolute certainty what the situation will be, so as a responsible organisation, we are contingency planning in the background so we are ready to deal with various scenarios.

“There are lots of reasons to be optimistic. We have seen that sport has returned at the elite level around the world.

“In some countries we are seeing fans return into venues, we are seeing technology improve all the time, whether that is around testing capability or treatment for the virus and we are seeing borders open.

Calveley maintains there are no intentions to set any “artificial deadlines” over whether or not the tour will be able to go ahead in 2021, with an evolving global situation under constant review.

The Lions’ eight-match South Africa trip begins on July 3, with three Tests scheduled against the Springboks.

A possible scenario could be for fixtures to be played behind closed doors, but it is one which Calveley would rather not contemplate.

“We all know that Lions tours need to have fans in there, without that famous sea of red, Lions tours are just not the same,” he said.

“We have been watching sport for the past many months and are all acutely aware that fans make a real difference.

“Of course we are hoping fans can get into those venues, and our ‘Plan A’ is making sure we are ready to deal with whatever pandemic environment we find in South Africa next year, and our planning does involve there being fans in those venues.”

Given the Japan game falls outside of World Rugby’s Regulation 9 international window for Test matches, Premiership Rugby are not mandated to release players to head coach Warren Gatland’s squad for the fixture.

Calveley, though, sees no reason why that should detract from what is sure to be a memorable occasion for what would be the Lions’ first Test match played in Scotland.

“It is reality of modern-day sports scheduling that you have multiple fixtures taking place simultaneously. You see that all across the world,” Calveley said.

“The fixture we have announced this morning takes place in Scotland, and we will arrange kick off times to make sure we are not clashing with other fixtures which are happening on the same day.

“This is a non-Regulation 9 fixture, so in all likelihood we are (going to be) using different groups of players.

“My view is there is lots of examples even within rugby of multiple Test matches happening on the same day – the Six Nations does it on the culmination of the championship.

“I am really sure there is more than enough enthusiasm. There are more than enough rugby fans out there to accommodate multiple fixtures and we are really looking forward to the Japan fixture up in Edinburgh.”