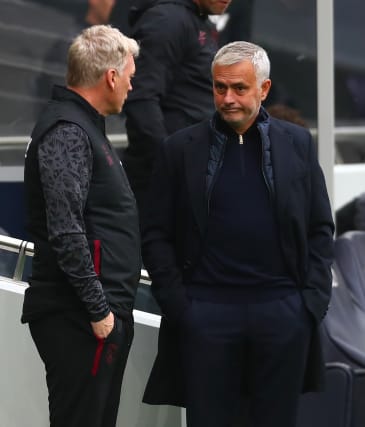 Tottenham boss Jose Mourinho insists his side are not ‘Spursy’ despite their capitulation in the final 10 minutes against West Ham on Sunday.

The north London club have earned that nickname over the years for being flaky, losing from winning positions and not turning up at big moments.

The 3-3 draw against the Hammers certainly fits into that category as, winning 3-0, they conceded three goals in the last eight minutes to drop two points.

But Mourinho says failure to defend set-pieces was the main cause of the slip.

“To be honest, what happened is a little bit out of context from what happened the rest of the season,” he said. “Against Southampton we were losing and we were strong enough to change the result.

“At Manchester United the worst thing happened, which was after one minute we were losing and we were strong enough to change that result.

“Against Newcastle, we were solid, we weren’t playing amazing, we were solid, and then what happened is one of the beauties of the VAR this season. So this game was completely out of context.

“I believe that winning 3-0 in minute 80 we could play 50 more matches and it’s not going to happen again. So I don’t want to be sticking on this and stories about ‘Spursy’, or this kind of thing.

“We have to just defend better at set-pieces, because even defensively the team is playing very well.

“We conceded one single goal from open play against Southampton, one. Apart from that penalties, lateral free-kicks, VAR goals, and we are quite solid.”

Spurs have a chance to put things right when they open their Europa League group campaign against LASK Linz on Thursday.

It is the third time Mourinho is playing in the competition and, having won it twice previously, the Portuguese is targeting a hat-trick.

“We’re going to try,” he said. “It’s the third time I played the competition and the other two times, one with Porto and one with United, we managed to win it.

“So the record in the Europa League is great, never knocked out. Of course, lost a few matches in the group phase but managed always to win it.

“It is difficult, it is a very long competition, the group phase is tricky, then you go to the knockouts and you get teams coming from the Champions League which is very unfair.

“If you play Champions League and you don’t qualify you go home. In the Europa League group phase if you finish third you go home, you don’t have another competition to play.”

Mourinho refused to say whether Gareth Bale would start against the Austrian side and only confirmed that Davinson Sanchez, who was on pre-match media duty, would be in his starting XI.

Eric Dier (hamstring) and Japhet Tanganga (thigh) are out, but Erik Lamela and Giovani Lo Celso are back after missing the West Ham match.

One man who will not be involved is defender Danny Rose, who has been left out of Mourinho’s 25-man Premier League and Europa League squads.

Rose, who spent the second half of last season on loan at Newcastle, is not in Mourinho’s plans at Spurs, but could not find a club to take him during the recent transfer window.

“Danny is not part of our squad. Danny wanted very, very, very much to leave in the January window last season. Why? Because he wanted to play and play and play,” Mourinho said.

“He went to Newcastle and in that moment I had immediately the feeling that a player with his mentality, his desire of being always first choice, always because he didn’t hide that he was thinking of the national team and the Euros, I always thought that our future would be Ben Davies and, at that time Ryan Sessegnon.

“Then later we got the opportunity to get (Sergio) Reguilon and that was also good for Ryan because it gave him the possibility to leave and to play and to have this experience in Germany (on loan at Hoffenheim), also for a kid to grow up it was great for us.

“So in this moment we had Ben Davies, Ryan Sessegnon and Reguilon. It’s as simple as that. Danny didn’t become part of our plans.