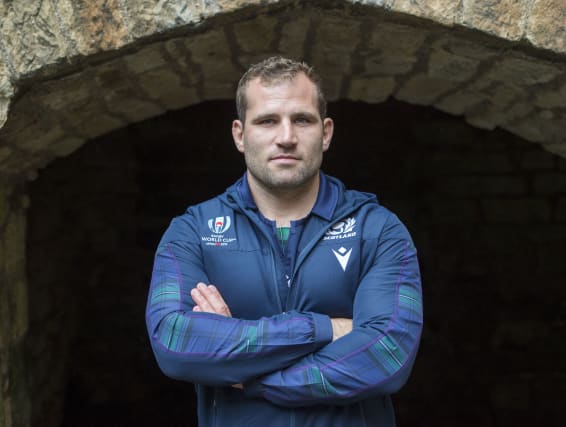 Gregor Townsend has paid tribute to Fraser Brown after handing the hooker the Scotland armband for the first time.

The Glasgow forward will lead out the Dark Blues on his 51st appearance for the national team as he stands in for Stuart Hogg against Georgia on Friday night.

Captaining his country seemed an impossible dream back when Brown, 31, was starting out his professional career with Edinburgh.

He was released by the capital club as two years of persistent injury worries threatened to derail his career hopes for good.

There were bouts of depression that also had to be overcome but Brown is firmly back on track now, with Townsend rating his current Warriors form up there with the best he has seen from the player.

He said: “We were thinking about what a great captain he’s been for Glasgow and he’s in the form of his life. We’re just looking for him to continue that.

“He’s thriving in the role. He’s come out of that lockdown period in fantastic physical shape and he’s a top-quality, experienced player.

“When you put it in the perspective of where he was six, seven years ago and before when it didn’t look like he’d play again, it’s a great turnaround.

“It’s a testament to his character and his determination to get back and make the most of his rugby career. He’s someone who will be very tough and committed on the field and bring the best out of others by leading by example.”

It is Brown’s turn to lead out the team this time but Townsend can already envisage a day when Jamie Ritchie will be given the honour.

The Edinburgh flanker has been named vice-captain for the Lelos clash and Townsend said: “We see leadership as not just down to the captain, and Jamie has been in our group of four leaders that we had in the Six Nations.

“He’s now in that small group where you have a vice-captain, and I’m sure he’ll get the opportunity in the future to lead his team out.

“He’s still a young man, he’s developing as a leader. Obviously he developed really fast as a player over the last couple of years.

“It’s been interesting and encouraging to see players that are given more leadership responsibility, that it doesn’t affect their game and they actually thrive on it, like Fraser has done at Glasgow this year and like Jamie did during the Six Nations.”