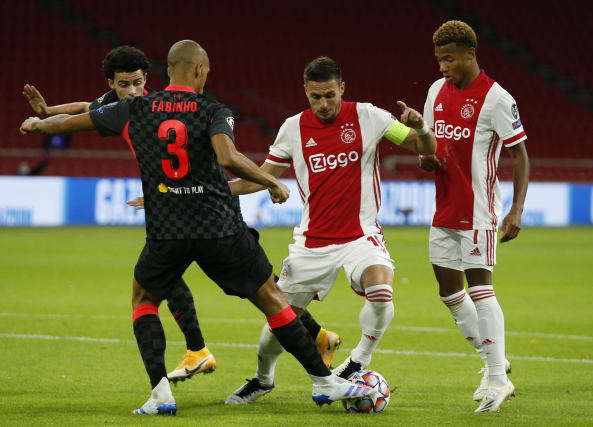 Nicolas Tagliafico’s own goal was enough for Liverpool to beat Ajax 1-0 in the Champions League but it was the display of makeshift centre-back Fabinho which offered encouragement for the long-term absence of Virgil Van Dijk.

As expected the Brazil midfielder dropped into the back four alongside Joe Gomez, the 35th centre-back partnership to start for Jurgen Klopp, and he barely put a foot wrong in Amsterdam.

While it was not a Van Dijk-style of commanding performance it was equally effective in its own way.

A couple of successful early tackles inside his own penalty area showed his aptitude for composure and control in tight spaces while his experience as a midfielder gave him a better awareness when it came to reading the game.

None more so than when he spotted Dusan Tadic was about to lob goalkeeper Adrian, charging back to hook the ball off the goalline just before the break to crucially maintain the Reds’ lead.

Like Van Dijk, Fabinho also proved a threat in the opposition penalty area, having one header deflected wide having beaten goalkeeper Andre Onana in the air.

It helped Liverpool keep only their second clean sheet in 13 European games as the away team on an opponent’s ground.

Coincidentally, on the two previous occasions Van Dijk had missed a Champions League match for Liverpool they kept clean sheets on both occasions, against Bayern Munich and Porto in the knockout stages.

Without the pace of their towering Dutchman, Liverpool’s back four played slightly deeper and were more reluctant to push both their full-backs higher up the pitch, with left-back Andy Robertson relishing the opportunity as the preferred option.

Ajax suffered an early blow when Mohammed Kudus was forced off with a knee injury in the seventh minute and was replaced by Quincy Promes, although that actually appeared to improve them as Tadic moved centrally.

Promes forced the first save of the match just past the half-hour, although Adrian did not have to move to block the winger’s shot from six yards.

Liverpool took some time to feel their way into the game – despite Robertson’s charges down the left – and there were long periods where Klopp’s side struggled to string passes together.

The goal, in the 35th minute, unsurprisingly came from the left. A throw-in picked out Sadio Mane and he cleverly turned Perr Schuurs but kicked the floor with his attempted shot.

There appeared no imminent danger but Tagliafico seemed to be caught off-guard by the mis-kick and diverted the ball into the net for Liverpool’s 250th Champions League goal in their 141st match.

Fabinho’s awareness and acrobatics kept the score at 1-0 going into the second half, which signalled the end of Curtis Jones’ full Champions League debut as the 19-year-old had looked off the pace and was replaced by Jordan Henderson.

If the visitors needed a wake-up call it came a minute after the restart when former Everton midfielder Davy Klaassen hit a post from distance, with Promes forcing a low save out of Adrian.

Klopp replaced his entire front line just before the hour, sending on Diogo Jota, Takumi Minamino and Xherdan Shaqiri, in what appeared a pre-planned move although Mane had to have an ice pack strapped to his right thigh as he took his place on the bench.

The last thing Liverpool needed was another injury, with Joel Matip, Thiago Alcantara and Naby Keita also all left at home, although at least they have plenty of options in the forward department.

Georginio Wijnaldum planted a header onto the roof of the net and Jota was denied a clear run on goal by the tackle of goalkeeper Onana on the edge of the centre-circle as Liverpool looked to give themselves a cushion.

But having weathered some Ajax pressure late on, with Fabinho clearing yet another cross inside his own penalty area in the 89th minute, they got their campaign off to a winning start after substitute Jurgen Ekkelenkamp fired over following Adrian’s failure to claim a cross.