Five-star Barcelona hungry for goals and feast on Ferencvaros 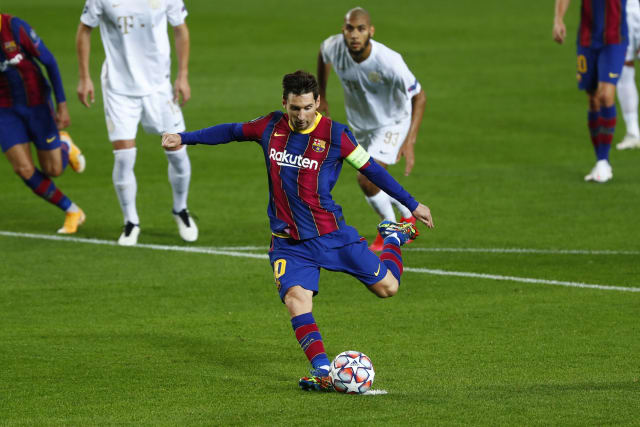 Lionel Messi was among the scorers as 10-man Barcelona eased to victory over Ferencvaros in their Champions League Group G opener at the Nou Camp.

The LaLiga giants went into the game as heavy favourites and delivered a fine performance to run out 5-1 winners.

Messi opened the scoring from the penalty spot as Barcelona boasted five different goalscorers, although they had to cope with the second-half dismissal of Gerard Pique.

The hosts were well on top by the time Messi was fouled inside the box by Adnan Kovacevic, dusting himself off to convert the spot-kick just before the half-hour mark.

The lead was doubled before the interval as Ansu Fati curled home a fine finish from Frenkie De Jong’s pass and Philippe Coutinho’s strike soon after the restart secured the points.

There would be more drama, however, as Pique was sent off after fouling Tokmac Nguen – Igor Kharatin scoring the resulting penalty to give the visitors a glimmer of hope.

Barca were quick to close the door on any Ferencvaros comeback, Pedri sweeping home with eight minutes remaining.

Ousmane Dembele had provided the assist for the fourth and the forward would grab the fifth and final goal himself, finishing well inside the box after Messi’s pass.