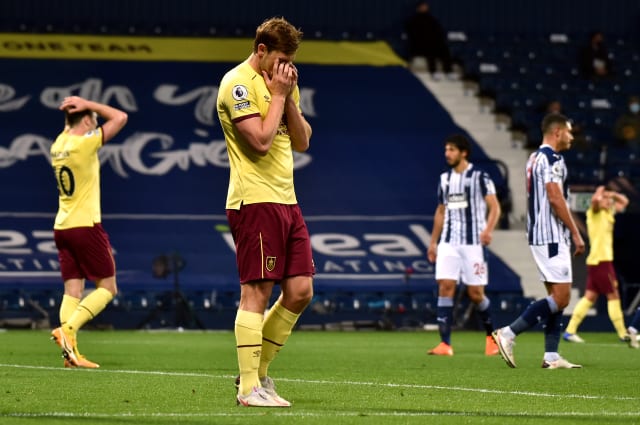 The Clarets host Tottenham and Chelsea in their next two games still looking for their first win of the season.

Wood hit the bar at The Hawthorns as Burnley climbed off the bottom of the table with a 0-0 draw on Monday.

They remain in the Premier League’s relegation zone but the striker remains confident despite three defeats in their opening four games.

“It wasn’t necessarily important to get something on the board with the games coming up,” he told the club’s official site.

“We know they’re tough, but we’ve had good records against them both in recent years.

“We’re up for the challenge and hopefully we will get some more points.

“We look forward to the positives. We’ve got a point on the board now and we can build from this to go into the next games.

“It was much better and back towards what we know. That’s how we’re supposed to be playing. We are solid and we build from a clean sheet.

“The defence was absolutely superb, so we take our hats off to them because they’ve done their job and now we’re going to have to do ours at the top of the pitch.”

Albion had their own chances with Nick Pope denying Grady Diangana and Matheus Pereira in the second half and Karlan Grant having a first-half header disallowed for offside.

The 36-year-old Serbian helped the Baggies to their first league clean sheet of the season and feels they will improve.

“I’m so happy to be back, so proud. I think I have been dreaming about this moment,” he told the club’s official site.

“I think we played well tonight but with a bit more belief and desire we could’ve got three points because most of the time we controlled the game.

“The team performance was good tonight and it was good for confidence. We played as a unit and not just the defenders but the midfielders and strikers also.

“Most of the time we were compact and it was very difficult to play against two strong strikers but we dealt with that.

“This was the first time me and Ahmed (Hegazi) played together so we will build on that and get better and better game by game.”