Where do Harry Kane and Son Heung-min rate among top duos of Premier League era? 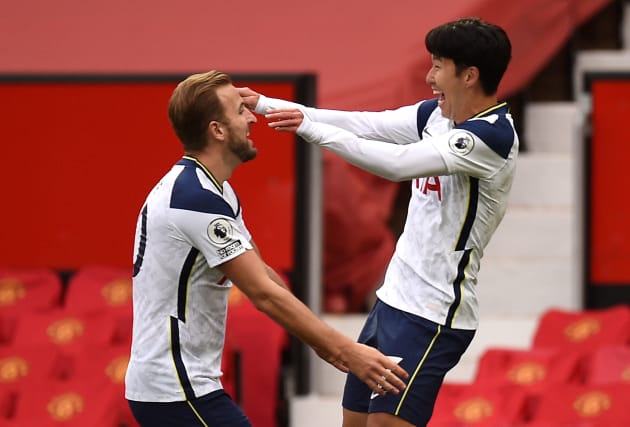 Harry Kane and Son Heung-min have excelled for Tottenham so far this season to cement their place as the Premier League’s most effective strike force.

The pair scored all of their side’s goals in Sunday’s 3-3 draw with West Ham and now have 12 between them this season, with eight assists for each other in the process.

Here, the PA news agency looks at how they compare to the most reliable duos of the Premier League era.

Kane has now scored 78 goals and Son 44 when they have shared the pitch in the league. Having played 8,222 minutes together, that equates to 1.34 goals every 90 minutes.

Kane set up Son in the first minute against West Ham with the South Korean returning the favour seven minutes later, taking them up to 28 goal-assist combinations in their time together.

That is more than any current partnership, with Manchester City’s Sergio Aguero and Kevin De Bruyne next on 20 and De Bruyne the provider for 19 of those. Kane and Dele Alli have combined 17 times, Kane scoring 15 of those, and Son and Alli a more evenly split 15.

Liverpool’s star attackers are the closest behind Son and Kane with a combined record of 1.28 goals per 90 minutes when playing together – Salah has 58 goals in that time, with Mane one away from joining him on a half-century. They also have 14 goal combinations, Salah scoring nine time from Mane assists and providing five in return.

The pair have left Roberto Firmino as firmly the third man in Liverpool’s attack but he has set up 10 Salah goals and 11 for Mane, while they have provided six and four assists respectively for his strikes.

The longest-serving and overall highest-scoring partnership on the list, Henry and Pires played over 12,000 minutes together and shared 162 goals, with Henry’s 108 exactly doubling the winger’s tally.

Another fellow Frenchman, Sylvain Wiltord, was also an effective partner for Henry in a shorter period, sharing 67 goals at better than one per 90 minutes, while Dennis Bergkamp was a long-standing creative foil to him but was left in the shade in terms of goalscoring.

Aguero passed Henry last season as the Premier League’s top-scoring overseas player, and he and Sterling have combined for 101 goals at 1.22 per 90 minutes, with the Argentinian scoring 65 and Sterling adding his 36th against Arsenal on Saturday as Aguero played for the first time this season.

Midfielder De Bruyne does not score enough to be viewed as part of a strike partnership with either but has set up 12 for Sterling and those 19 for Aguero – as well as 10 for Gabriel Jesus.

Like Henry and Pires, the Liverpool duo were not a traditional strike pairing, with Gerrard playing in midfield but weighing in with an impressive share of goals – including 29 with Torres on the pitch, adding to the Spaniard’s 52 at a combined 1.13 per game.

Gerrard’s subsequent partnership with Luis Suarez was almost identical – 26 goals to the Uruguayan’s 55 in 6,497 minutes, just 35 more than he played with Torres.