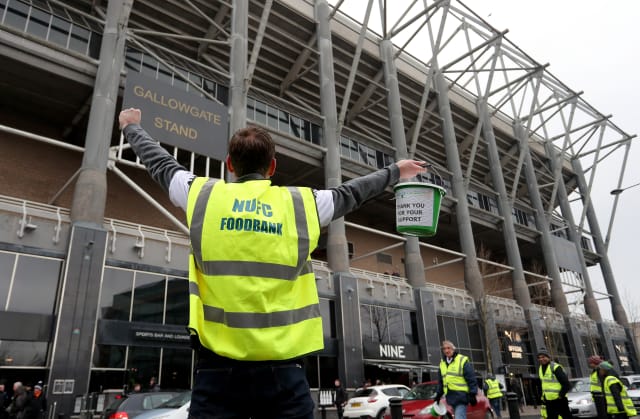 Newcastle supporters raised £16,000 by choosing to give to charity rather than watching their team on pay-per-view at the weekend, a fans’ group has said.

Premier League matches in October which have not been earmarked for regular televised coverage can only be watched live via Sky Sports or BT Sport box office services for a fee of £14.95.

Many fans felt that was a step too far when they already pay regular subscriptions to broadcasters as well as for season tickets to watch their team in person, something the coronavirus pandemic currently prevents them from doing.

The @nufcfoodbank Twitter account said Newcastle fans had raised £16,000 by giving money to the city’s West End food bank rather than pay to watch the Magpies’ match against Manchester United on Saturday night.

Other supporters’ groups are encouraging fans to boycott PPV and give to charity instead, while a petition has been started on change.org calling on for the pay-per-view scheme to be scrapped.

Premier League chief executive Richard Masters said last week that the pricing was “defensible” and that the broadcasters were ultimately responsible for setting the price.

The chief executive of BT’s consumer division Marc Allera said on Thursday that the suggested price came from the Premier League, and that BT was “pretty much just covering our costs to put these games on”.

Allera said the intent of the move was to “get some money moving into the clubs and the leagues that are struggling”.

It is understood the Premier League clubs are yet to reach a decision on how to split any revenue generated from the pay-per-view matches.