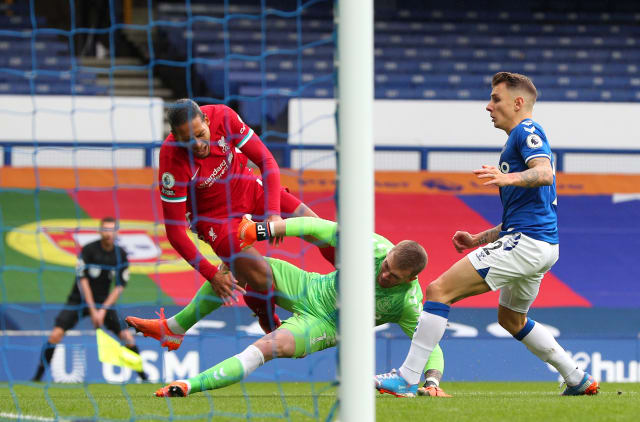 The PA news agency understands the England international will escape punishment as the incident during Saturday’s 2-2 derby draw at Goodison Park was seen by the match officials.

Under the Football Association’s disciplinary rules, retrospective action can be taken if an incident was either not seen at the time or when it was reviewed by VAR.

Van Dijk was forced from the field after the pair collided during a Reds’ attack with Pickford desperately trying to block the defender’s passage to goal.

The incident was reviewed by VAR official David Coote with the Holland international adjudged to have been offside before he was caught by the keeper, although it was later suggested that the actual challenge had not been re-examined and referee Michael Oliver was not asked to take a second look.

However, former referee Dermot Gallagher has insisted Pickford should have been dismissed.

Gallagher told Sky Sports News: “There are three steps: is it offside? Is it a penalty? Is there further sanction?

“Is it a penalty? Well, it is a penalty, so you have got to go back and check if it’s offside. They check the offside, it is offside, so that negates the penalty, so I think what they’ve done, they’ve gone back from step 2 to step 1.

“Obviously step 1 eliminates step 2 and it got overlooked to go to step 3, which it should have done and we all know it should have been a red card..

“It was just a human error and all we can do is apologise for it and there’s nothing more you can say.”

Liverpool have confirmed that Van Dijk suffered anterior cruciate ligament damage in the incident and is expected to be sidelined for several months as a result of surgery, although he is yet to be ruled out for the remainder of the season.