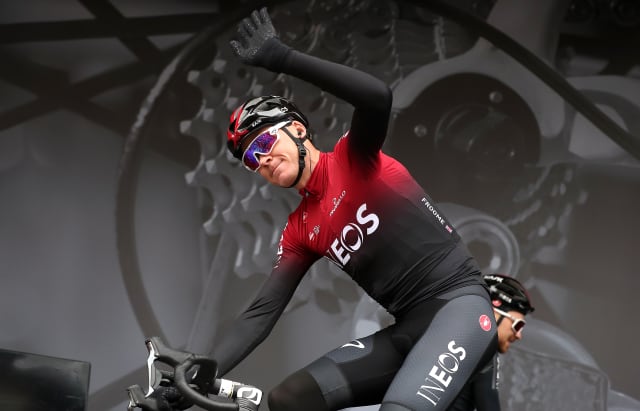 Chris Froome has admitted he remains unsure of his form going into the Vuelta a Espana, suggesting he could end his time with the Ineos Grenadiers in a support role over the next three weeks.

More than a year on from his career-threatening crash at the Criterium du Dauphine in June 2019, the 35-year-old will line up for the final race of his 11-year stay with Sir Dave Brailsford’s team prepared to back team-mate Richard Carapaz if he cannot contend himself.

“It’s quite hard to say where I am at the moment, I haven’t done many stage races recently,” said Froome, a two-time Vuelta winner.

“The signs in training have been better and better and I’m feeling more like my old self again which is fantastic, but it’s hard to quantify that.

“I haven’t been able to race and see where I’m at against my rivals. I’m going take the first few days to see exactly where I’m at from that point and I’ll be able to have a clear plan for the rest of the race and know exactly what job I can fulfil at that point.”

It has taken a herculean effort from Froome to overcome the multiple broken bones he suffered 16 months ago, but the shake up of the calendar amid the pandemic has not helped his cause in terms of getting back his rhythm.

Two months after he missed his primary target of selection for the Tour de France, and a shot at a record-equalling fifth Tour crown, many questions still remain ahead of his first three-week race since the 2018 Tour.

“I’m feeling better and better on the bike and I can take a lot of confidence from that,” Froome said. “I’ve got to keep in mind I haven’t raced a Grand Tour for two years now, it’s very much about getting back into it again.

The race, shortened to 18 stages after the cancellation of a planned start in Utrecht, begins in Irun on Tuesday and will offer a brutal examination with three mountain stages in the first six days – subject to the weather at this unusually late time in the year.

Against a field stacked with riders who took on the Tour last month, not least Primoz Roglic and Tom Dumoulin, there will be little time for Froome to ease himself in.

Though Brailsford indicated back in August the team would be all-in behind Froome for the Vuelta, the selection of 2019 Giro winner Carapaz alongside him looks like more than an insurance policy.

“A lot of this process has just been getting back up to speed again and getting used to race rhythm and trying to find that top end,” Froome added.

“I’ve certainly closed that gap recently and it will be interesting to see how far off I still am once we get into the guts of this Vuelta.”

Froome will move to the Israel Start-Up Nation squad next season after more than a decade with what was Team Sky and then Team Ineos.

“It is a bag of mixed emotions,” said Froome, who developed from an often awkward-looking young rider into arguably the greatest Grand Tour rider of his generation under the team’s guidance.

“I’m looking forward to finishing the time at Ineos on a high. We’ve got a great team here to support Richard as much as possible. We’ll take it one day at a time and hopefully finish on a high note.”