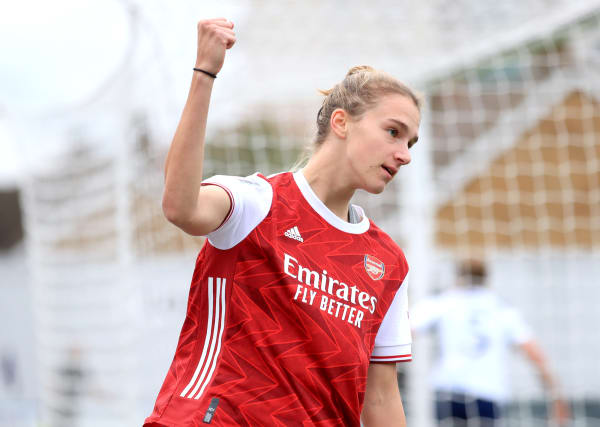 Former Arsenal forward Kelly Smith says “complete striker” Vivianne Miedema is the best player in the world and “only going to get better”.

Miedema set a new Women’s Super League scoring record on Sunday as she registered a hat-trick in Arsenal’s 6-1 thrashing of Tottenham.

Having previously been level with Nikita Parris at the top of the WSL’s all-time scorers list, the 24-year-old Holland international moved clear with her tally now up to 52 goals from 50 appearances.

“You just look at the goals-to-games ratio and she’s just been outstanding. She scores goals with her left and right foot, her head, she sets goals up. For me, she is just the complete striker, and she’s the best in the world at the moment.

“She’s always a threat no matter what minute of the game it is. I think her movement is very clever, and her finishing ability is phenomenal. When she’s in front of goal it’s just this calm, composed approach that she has.”

Smith has no doubt Miedema is “heading in the right direction with the figures she is meeting and her level of play” with regard to the Ballon d’Or.

“There is no limit for her. She’s still only young and learning the trade, and is only going to get better with time.”

She is Holland’s record scorer with 69 goals, and was part of the teams that won Euro 2017 on home soil and were runners-up at the 2019 World Cup.

When asked if she thought it had been apparent from the start that Miedema would be as special as she has, Smith said: “No. I remember doing punditry at the 2015 World Cup – there was big talk about Miedema then, and I wasn’t that impressed with what I saw on the international stage.

“I expected something more from what I was hearing, and I thought she’s not really got that level in her. And then obviously she’s gone on to develop and certainly prove me wrong!”

Smith says there is “a nice love affair” between Miedema and Arsenal and their fans.

She added: “The only other team she could go to that is more successful, obviously thinking about the Champions League, is probably Lyon.

“It’s just whether she would want to go and try her game over there. But I think England is now the best league in the world, so I don’t understand why she would want to leave this league and go and play in France.

“This league over here is very competitive. It depends what she wants as a player.”