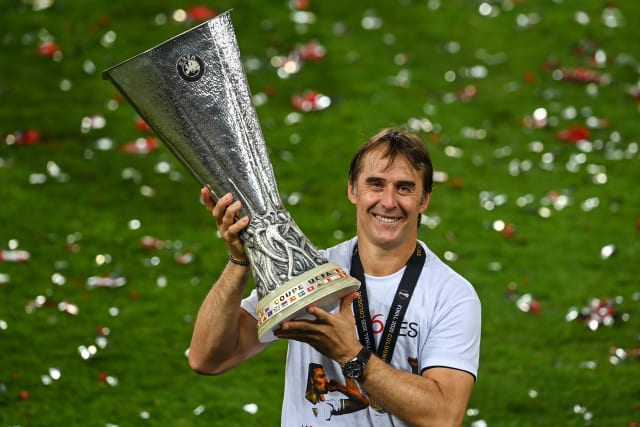 Julen Lopetegui has heaped the pressure on Frank Lampard by declaring Chelsea one of this year’s Champions League favourites.

The Blues’ chastening 4-1 last-16 second-leg loss to last season’s eventual champions Bayern Munich was only back in August, and manager Lampard has since recruited a raft of high-profile new faces.

Chelsea’s work in progress was underscored by Saturday’s 3-3 Premier League home draw with Southampton but, despite the Blues’ teething problems, Sevilla’s former Spain boss Lopetegui was fulsome in his praise.

“We are up against one of the teams that could win the title, in Chelsea, but we want to focus on performing well tomorrow – that’s all we can do,” said Lopetegui.

“I think it’s going to be a tough ask. Every match is difficult, but especially in the Champions League against a team like Chelsea.

“Chelsea have bought some good players, invested a lot of money, it’s a great squad and coach that knows the club inside-out.

“It’s very challenging to play in the Champions League, but it’s the culmination of what we did last season.

“We often talk about enjoying football, but that’s the only way we know, to give everything we have.

“They are an extraordinarily strong opposition. Chelsea have some fantastic, top players, but they are going to force us to be at our very best.

“We’ve got to raise ourselves to our very best standard, because that’s the level that we’ll need tomorrow.

“I really don’t think the starts for the season for both sides count for every much at this point.

“They have been playing well lately and they will force us to produce our best possible performance across the board. We’re going to need to play very well tomorrow.”

“They already had fantastic players in every position, but now they’ve added even more,” said Lopetegui.

“So they have lots of alternatives in every position, and they have a really attractive football philosophy – they are an offensive side with players that tie into that.

“So for us it’s about competing against a team with those characteristics.”