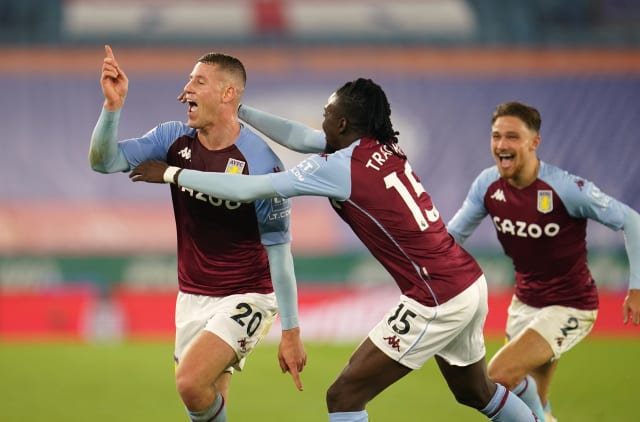 Ross Barkley’s added-time winner lifted Aston Villa into second in the Premier League as they beat Leicester 1-0 at the King Power Stadium.

The on-loan Chelsea midfielder’s 25-yard strike as experienced defender Jonny Evans backed off was the one piece of quality in a pay-per-view game which was in danger of seeing viewers ask for their money back.

With the Premier League’s first goalless draw of the season looming, Barkley collected a pass from John McGinn and advanced 10 yards before lashing a low shot past Kasper Schmeichel.

In truth neither side deserved to win a game low on entertainment with the Foxes suffering from the absence of Jamie Vardy with a calf injury and Villa strangely low-key considering their last outing was the 7-2 win over Liverpool.

But the strike from Barkley, his second in as many games since joining, extended the top flight’s only remaining 100 per cent record, as a side which escaped relegation by just a point in July found themselves just a point behind leaders Everton.

Villa have won their opening four league games of a season for the first time since the 1930-31 campaign.

Boss Dean Smith named the same team which beat the Premier League champions but there was nowhere near the same fluency and clinical efficiency.

The telepathy which Jack Grealish and Barkley seemed to have had in that game was on a different wavelength in the first half, which allowed teenage debutant Wesley Fofana to coast through the game.

Leicester’s 19-year-old central defender, a £30million arrival from Saint-Etienne on deadline day, slotted seamlessly into the back four in the absence of Caglar Soyuncu, missing with an abductor injury, easing himself in with a couple of early strong challenges and growing in stature.

Foxes right-back Timothy Castagne had the best of the three shots on target registered in the opening 45 minutes, all by the hosts, forcing Emiliano Martinez to concede a corner at his near post.

Villa’s best opportunity fell to Trezeguet on the rare occasion Grealish found space on the left but he shot wide under pressure.

And it was not because the standard of defending was so good, with Villa’s Matty Cash booked after resorting to pulling down Harvey Barnes’ shorts to prevent the Leicester midfielder getting away from him.

The game was littered with niggly fouls – 36 in total – and the fact there were only two more shots on target (nine) than bookings said everything about the scrappy nature of play.

Little improved after the break, with Ezri Konsa heading wide a Grealish corner when he should have done better and Youri Tielemans twice testing Emiliano Martinez from distance, once with a deflected low shot and the other a free-kick.

The introduction of James Maddison, back after a calf injury, failed to lift the Foxes, who later turned to Islam Slimani for his first appearance for the club in 1,006 days.

Villa finally recorded a shot on target in the 69th minute, Douglas Luiz hitting his effort straight at Kasper Schmeichel from distance, but it was their final one in the first minute of added time which made all the difference.

Frank Lampard not concerned with Jorginho’s penalties after latest miss