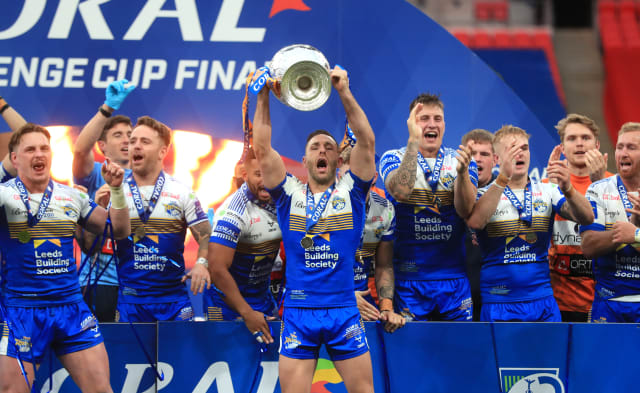 Leeds captain Luke Gale believes the Rhinos’ Coral Challenge Cup triumph can herald the start of a new dynasty for the club.

The England scrum-half kicked a drop goal five minutes from the end of Saturday’s game at Wembley to secure a thrilling 17-16 victory over Salford and with it Leeds’ first Cup success for five years.

The Rhinos won back-to-back Wembley finals in 2014 and 2015 and were Super League champions six times in 11 years up to 2017 thanks largely to the club’s golden generation.

They struggled to fill the void created by the departure of Kevin Sinfield and Danny McGuire and the retirement of Jamie Peacock and Rob Burrow, but Gale says under coach Richard Agar they once more stand on the threshold of greatness.

“I don’t think this is the first,” he said. “It’s a young team and we’re only going to get better.

“I think it’s only my 12th game for Leeds, it’s a new team. Rich Agar is a bit of an unsung hero for what he has done for this team.

“They got dished up by Bradford last year so to go on and win the Challenge Cup the following year just shows what a great job he’s done.

Leeds’ celebrations went on long into the night but they will be back in training on Monday to prepare for Friday’s Super League game against reigning champions and current leaders St Helens.

“We’re still in the fight for the top four,” said full-back Richie Myler, who won the Lance Todd Trophy as man of the match at an empty Wembley.

“We’ll have a good time tonight but, after that, we’ll be chomping at the bit to keep going.

“Once you taste success, you don’t want to ease up. I think we’ve got a special group that want to go on and achieve more things.”

While Myler is able to add his winners’ medal to the one he gained eight years ago as a scrum-half with Warrington, for Gale it is a new experience well into his career.

“It’s taken me until 32 but I never gave up,” said Gale, who began his career in Leeds’ academy but found his path to the first team blocked by McGuire and Burrow and had spells with Doncaster, London Broncos, Bradford and Castleford before finally being given a chance with his home-town club.

“It’s been a great journey and one helluva story,” he said. “It’s what dreams are made of, I’m overjoyed.”

Myler also spoke of his journey after the arrival of Gale at the start of the season forced him to find a new position in the team.

“When you’re hit by adversity you can go one or two ways,” he said. “Twelve months of hurt, I’ll take that for the Lance Todd and a winners’ medal.”

Joy in the Rhinos camp was in stark contrast to the gloom among the Red Devils, who failed to end an 82-year wait to lift the Challenge Cup, just 12 months after losing a maiden Grand Final to St Helens.

And the pain was especially felt by veteran half-back Kevin Brown, who is still waiting for his first medal after experiencing four Challenge Cup final defeats with four different clubs.