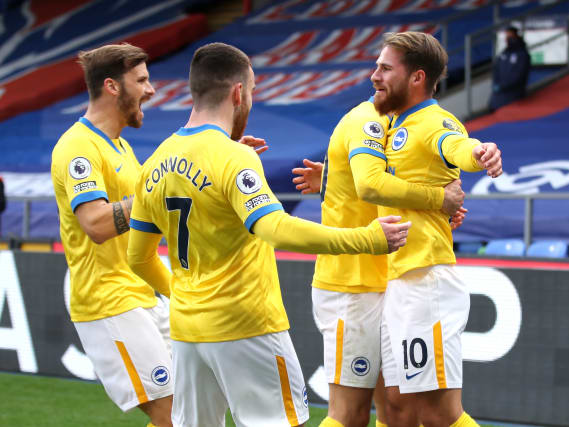 With Albion on the verge off an unjust defeat to bitter rivals, Argentina midfielder Mac Allister picked a timely moment to claim his maiden Premier League goal by firing in from the edge of the box.

Wilfried Zaha had looked set to be the Seagulls’ nemesis once again by putting the Eagles on course for victory with a first-half penalty.

The 19th-minute spot-kick, awarded after Tariq Lamptey was adjudged to have fouled Michy Batshuayi, was the Eagles’ only attempt at goal all afternoon and Zaha’s seventh strike in 13 outings against Albion.

Brighton ended the match a man down after captain Lewis Dunk was deservedly shown a straight red card for a two-footed lunge at Gary Cahill while attempting to force home a dramatic injury-time winner.

Graham Potter’s side, who announced the signing of former England forward Danny Welbeck ahead of kick-off, controlled possession in south London but lacked a cutting edge until Mac Allister eventually intervened.

In addition to denying Palace all-important bragging rights, the late leveller moved Albion onto four points from five matches, with their opponents three better off.

Both clubs came into a derby contest devoid of hostility in the stands on the back of successive top-flight defeats.

After a 4-0 thumping at Chelsea before the international break, the Eagles were able to bring back former England defender Cahill from injury for his first appearance of the season as part of four changes.

Palace’s backline had plenty to contend with early on as Brighton dominated the opening exchanges.

But, having spurned a handful of promising openings, the visitors fell behind against the run of play.

Referee Stuart Attwell immediately pointed to the spot when Eagles striker Batshuayi went down fairly easily in the box under a challenge from Albion wing-back Lamptey.

Ivory Coast international Zaha has scored more times against the Seagullls than any other club and he duly sent visiting goalkeeper Mat Ryan the wrong way from 12 yards to claim his fourth goal of the season.

The goal was Palace’s only meaningful foray forward of an opening period in which Albion trio Adam Lallana, Yves Bissouma and Ben White each lashed wide at the other end.

Brighton remained the more threatening after the restart and top scorer forward Neal Maupay was twice denied early in the second period.

The Frenchman’s deflected shot on the turn was kept out on the line by Eagles goalkeeper Vicente Guaita before he wasted a golden chance to level by delaying his shot and being blocked by Joel Ward having been slipped in by Lallana.

In between those opportunities, on-loan Chelsea man Batshuayi had a strike chalked off for offside, although Palace opportunities were almost non-existent.

Palace had snatched a 1-0 win at the Amex Stadium in February and looked set to hang again here.

However, there was to be a late twist. Eagles defender Ward gifted possession to Maupay and the ball was moved on to Mac Allister, who struck a deflected effort into the left corner to spark jubilation in the visiting dugout.

There was more drama to follow as Dunk was justifiably dismissed three minutes into seven of added time following a poor challenge which left Cahill in clear discomfort.