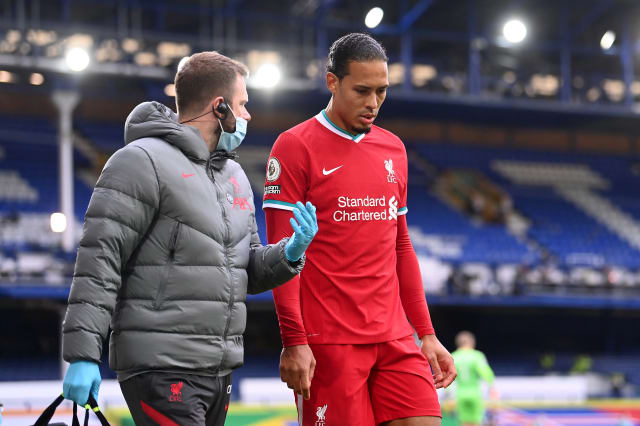 Elsewhere, Tottenham blew a three-goal lead in 12 minutes, but Manchester City proved that decent defending is still a thing.

Here, the PA news agency looks at what we learned from the Premier League this weekend.

Pickford: The good, the bad and the ugly

Jordan Pickford remains under the spotlight after his erratic display in the Merseyside derby. The England goalkeeper made two outstanding saves to keep Everton in the game, and then nearly lost it for them when Jordan Henderson’s shot beat him too easily, only for VAR to come to his rescue. But it was his needless, dangerous lunge on Van Dijk, leaving the Dutchman needing surgery, which left a sour taste in the mouth. At this rate Pickford could end up costing both Liverpool and Everton the title.

It appeared to be the perfect 20-minute run-out for the returning Gareth Bale, with Tottenham 3-0 up and cruising against West Ham. The Hammers pulled two back before Bale almost capped his return with what would have been the clincher. But his shot flew wide and at the other end Manuel Lanzini rifled in an equaliser. It just goes to show that not even a three-goal lead with 81 minutes on the clock is safe during this most bizarre of seasons.

Case for the defence

Manchester City managed to prove that disciplined defending is not totally a thing of the past as they kept a clean sheet against Arsenal, thanks in no small part to goalkeeper Ederson’s brilliant performance. The Brazilian produced two incredible saves late in the first half to prevent Bukayo Saka and then Pierre-Emerick Aubameyang from cancelling out Raheem Sterling’s goal.

It has been a wretched start to the season for Harry Maguire, whose form for Manchester United and England has dipped horribly, culminating in that red card against Denmark last week. But the United skipper finally had something to celebrate when his goal helped United to a 4-1 win at Newcastle. United and England will be hoping it marks a turning point in Maguire’s fortunes.

VAR. What is it good for?

Absolutely nothing, if you are of a Liverpool persuasion. The most pedantic of offside calls robbed Henderson of a late winner. Yet Pickford’s challenge on Van Dijk went completely unpunished. The PA news agency understands video official David Coote did not check for a potential red card despite having the power to do so, calling ‘check complete’ once he had ruled the Dutchman had been offside. Baffling.