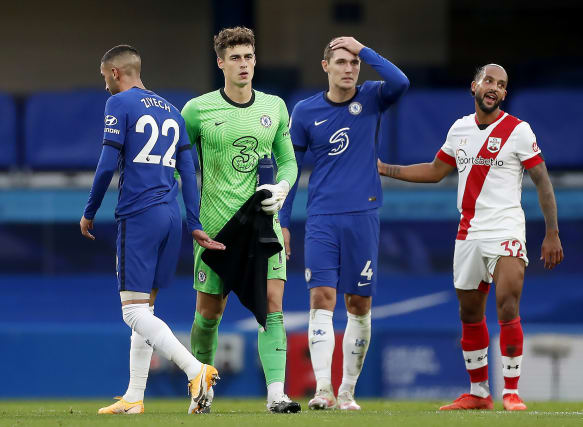 Frank Lampard insists his struggling goalkeeper Kepa Arrizabalaga has the mental strength to turn around his slump in form at Chelsea.

Chelsea coasted into a 2-0 lead thanks to a stunning Timo Werner brace, with Kai Havertz also on target.

But Saints battled back through Danny Ings and Adams, with Jannik Vestergaard’s stoppage-time strike stealing a point from a deserved draw.

Kepa was recalled for the Stamford Bridge clash in the wake of £20million recruit Edoard Mendy’s thigh injury, but endured another afternoon to forget.

Despite the 26-year-old’s continued battle for form however, Lampard vowed to keep supporting the Spain star.

“He has to be strong enough mentally, that’s the job we’re in,” said Lampard. “He has to deal with that, he has the support of myself and his team-mates.

“He has to keep working, that’s the only way through it… to work and feel the support of everyone around him.

“It’s unfortunate because he did make two really good saves today, but obviously with something like the second goal then eyes are drawn to that.

“But it certainly wasn’t just Kepa involved in that.

“Mendy will probably be fit in the next week or two weeks and that’s a decision then about who plays.

“I’m frustrated with the draw, and the players are and would be because the first half was as good as we’ve played this season.

“It was great football, and we could have had more goals and put the game beyond Southampton.

“Mistakes will always concern you and for the second goal, that’s a situation we should clearly have dealt with in much simpler terms. You just can’t be conceding goals like that.

“Southampton were the better side in the second half and there’s certainly an element of game management for us, and that’s disappointing.”

Hailing his side’s resolve to battle to the draw, Southampton boss Ralph Hasenhuttl revealed his side drew motivation from their changing-room situation at Stamford Bridge.

The Covid-19 regulations mean both teams have to change separately, and Hasenhuttl felt Saints were situated too far away from the pitch area.

“We lost nearly three minutes of the interval when we had to go through and you have to come out earlier, so it’s not possible,” said Hasenhuttl.

“You want to coach and reorganise the team, and it’s a long way, it’s too long.

“We used the time well that we had. It was good motivation because we could say to the guys, ‘look, we are in the last part of the stadium, but let’s get back into it’.

“We hadn’t been aggressive enough against them in front of the back four.

“The first goal and the second goal it was not good enough. It was a disaster the first 20 minutes. We must close better from the front.

“It was a deserved point in the end because we were the better team in the second half.”