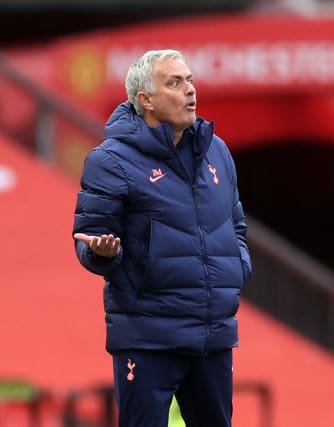 Tottenham boss Jose Mourinho is revelling in how his players are worried about their place in the team.

Mourinho has praised chairman Daniel Levy for helping him to assemble a Spurs squad that has significant strength in depth.

Mourinho now has a selection headache for the game against West Ham on Sunday.

“I can feel in the players these feelings that I love, which is that they are happy but they are worried,” he said.

“This is the kind of feeling you have in the top teams and we are having that now.”

Spurs, who have scored 13 goals in their last two games, have an embarrassment of riches in the attacking third, with Bale and Vinicius to come into the fray.

Mourinho says it is among his best ever.

“With the number of players, yes,” he said. “Of course I had incredible attacking forces. I remember my first season in Inter, not the season we won the treble, the strikers were (Zlatan) Ibrahimovic, Adriano and Hernan Crespo and I had these in more than one club.

“Especially in these three attacking positions it is top quality and great numbers.”

Mourinho was finally able to bring in a striker to help share the workload with Harry Kane and Vinicius, a loan signing from Benfica, will start on the bench against the Hammers.

“He can play. Of course, it’s never easy to come from a different country with different football,” Mourinho said.

“It’s never easy when you don’t speak the language but incredible support and friendship immediately from some of the guys. Lucas, he immediately took care of him, of course the communication with us the staff helps.

“So, if you want to know, I can tell you that Harry Kane starts and Vinicius will be on the bench for Sunday.”